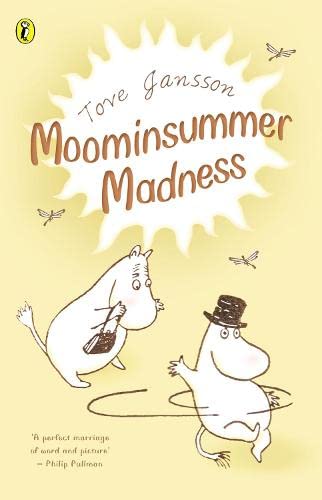 In Stock
£9.99
A great flood wave threatens Moomin Valley! When the Moomin family is flooded out of its home, the Moomins set about finding themselves a new one. And being resourceful little creatures, they soon find a very original one: a floating theatre.
Like New Very Good Good Well Read
Only 3 left

It all began with a hot day in June, and a volcano dropping black ash on Moominmamma's washing. Then a crack appeared in the ground, and Moomintroll's toothbrush slipped straight down into the dark and yawning earth.

Then a great flood wave came crashing through Moomin Valley. And that was why the Moomins found themselves a new home, and why they all had so many strange adventures, ones that were odd even by Moomin standards. . .

"The Moomin books make for both splendid bedtime read-alouds and solitary savoring." -"Wall Street Journal" "It's difficult not to be drawn in by the adventures of Moomintroll and his family. . . . The Moominfolk face life's odd twists and occasional disasters with philosophical calm-an unusual and endearing perspective that will hook readers of all ages."-"Publishers Weekly""Jannson's invention and philosophy of life remain as appealing as ever."-"The Horn Book""Read this Finnish classic for Jansson's quirky humor and lightly satiric view of life."-"St. Petersburg Press""A lost treasure now rediscovered . . . A surrealist masterpiece."-Neil Gaiman"Jansson was a genius of a very subtle kind. These simple stories resonate with profound and complex emotions that are like nothing else in literature for children or adults: intensely Nordic, and

GOR001132635
Moominsummer Madness by Tove Jansson
Tove Jansson
Moomins Fiction
Used - Very Good
Paperback
Penguin Books Ltd
1971-06-24
144
0140305017
9780140305012
N/A
Book picture is for illustrative purposes only, actual binding, cover or edition may vary.
This is a used book - there is no escaping the fact it has been read by someone else and it will show signs of wear and previous use. Overall we expect it to be in very good condition, but if you are not entirely satisfied please get in touch with us.