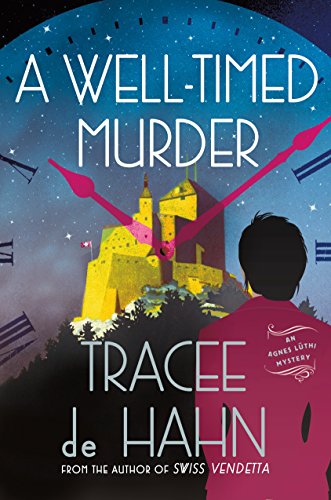 In Stock
£13.99
Tracee de Hahn's next magnetic mystery follows Swiss police detective Agnes Luthi as she investigates the death of a Swiss watchmaker who'd just made a revolutionary discovery.
Very Good
Only 2 left

Swiss-American police officer Agnes Luthi is on leave in Lausanne, Switzerland, recovering from injuries she sustained in her last case, when an old colleague invites her to the world's premier watch and jewelry trade show at the grand Messe Basel Exhibition Hall. Little does Agnes know, another friend of hers, Julien Vallatton, is at the same trade show - and he's looking for Agnes. Julien Vallatton was friends with Guy Chavanon, a master of one of Switzerland's oldest arts: watchmaking. Chavanon died a week ago, and his daughter doesn't believe his death was accidental. Shortly before he died, Chavanon boasted that he'd discovered a new technique that would revolutionise the watchmaking industry, and she believes he may have been killed for it. Reluctantly, Agnes agrees to investigate his death. But the world of Swiss watchmaking is guarded and secretive, and before she realises it, Agnes maybe walking straight into the path of a killer.

"Timing, Agnes concludes, is the key to law enforcement as well as love. The insider's look at the rarefied world of high-end chronometers adds to the appeal of this engaging crime novel." --Booklist

"An enjoyable and suspenseful thriller...perfectly paced, A Well-Timed Murder is bound to appeal to both traditional mystery lovers and those who enjoy an intriguing novel." --Shelf Awareness

"Secret pasts and hidden motives abound as Inspector Agnes Luthi hunts for a killer in this elegant and suspenseful novel. Tense, atmospheric, and richly detailed, Swiss Vendetta is a gripping, multi layered mystery that will keep you guessing until the very end!"--Ashley Weaver, author of Murder at the Brightwell

"Fans of both contemporary and historical mystery will devour this debut from Tracee de Hahn as her modern-day sleuth wades through secrets and deceptions in a centuries-old chateau."--Alyssa Maxwell, author of The Gilded Newport Mysteries

"Absorbing...De Hahn sets up a locked-room mystery with potential for rich interpersonal tensions. The rarefied, restrictive world of Swiss aristocracy provides a tantalizing backdrop, and Agnes--born to American parents, raised in Switzerland, and a widowed mother of three sons after her husband's recent suicide--is a strong series lead...Those who like a fireside read on a winter night will be pleased."--Publishers Weekly

"This clever take on the locked-room mystery--a locked ch teau, if you will--introduces readers to an appealing heroine in an unusual setting in what will hopefully be a long series."--Library Journal

TRACEE DE HAHN completed degrees in architecture and European history at the University of Kentucky and then lived in Europe, including several years in Switzerland. She currently lives in Virginia with her husband, a Swiss architect, and their Jack Russell Terriers. This is her second novel, following Swiss Vendetta.

GOR009962416
A Well-Timed Murder by Tracee De Hahn
Tracee De Hahn
Used - Very Good
Hardback
St Martin's Press
2018-02-09
352
1250110017
9781250110015
N/A
Book picture is for illustrative purposes only, actual binding, cover or edition may vary.
This is a used book - there is no escaping the fact it has been read by someone else and it will show signs of wear and previous use. Overall we expect it to be in very good condition, but if you are not entirely satisfied please get in touch with us.