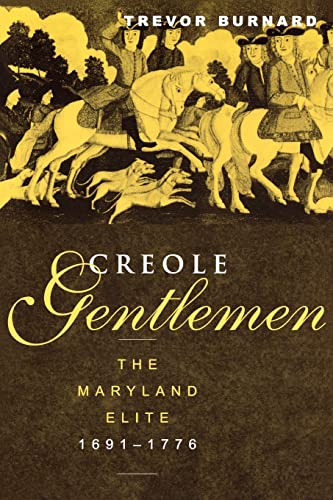 In Stock
£27.99
Examining the lives of 460 of the wealthiest men from colonial Maryland, Burnard traces the development of this elite from a profit-driven merchant-planter class in the 17th century to genteel plantation owners in the 18th century.
Very Good
Only 1 left

Examining the lives of 460 of the wealthiest men who lived in colonial Maryland, Burnard traces the development of this elite from a hard-living, profit-driven merchant-planter class in the seventeenth century to a more genteel class of plantation owners in the eighteenth century. This study innovatively compares these men to their counterparts elsewhere in the British Empire, including absentee Caribbean landowners and East Indian nabobs, illustrating their place in the Atlantic economic network.

"Burnard's book makes a useful and worthy contribution."
-"The Virginia Magazine of History and Biography
"Trevor Burnard breathes new life into the field of Maryland's colonial history by providing us with a superb portrait of its native-born, Creole elite. Deftly uncovering the various layers of reality that gave meaning to their experience, he captures the distinctive duality of their identity, split between an ardent pursuit of British cultural values, especially genteel respectability, and a rapidly growing independence coupled with a commitment to local, provincial interests .A major contribution to the scholarship on early modern British America."
-Michael J. Rozbicki, Author of "The Complete Colonial Gentleman: Cultural Legitimacy in Plantation America
"This is a lucid, superbly argued study of "the lives of moderately well off gentleman at the edges of the Atlantic plantation world" that reconstructs the social and material contexts that anchored the identities and framed the behaviors of Maryland's elite.
."
-S. Max Edelson, University of Illinois at Urbana-Champaign

Trevor Burnard is a Reader in Early American History at Brunel University in England.

Introduction 1. Problems and Perspectives: A Picture of Maryland Elites Part One: Wealth 2. A Gentleman's Competence: The Ambitions of the Maryland Elite 3. 'A Species of Capital Attached to Certain Mercantile Houses': Elite Debts and the Significance of Credit Part Two: Family 4. The Demography and Character of Elite Families 5. Arrows Over Time: Elite Inheritance Practices Part Three: Society 6. The Progression of Provincial Politics 7. The Development of Provincial Consciousness: The Formation of Elite Identity Conclusion: Towards a History of Elites in the Eighteenth Century British Empire

GOR009942467
Creole Gentlemen: The Maryland Elite, 1691-1776 by Trevor Burnard
Trevor Burnard
New World in the Atlantic World
Used - Very Good
Paperback
Taylor & Francis Ltd
2002-01-02
288
0415931746
9780415931748
N/A
Book picture is for illustrative purposes only, actual binding, cover or edition may vary.
This is a used book - there is no escaping the fact it has been read by someone else and it will show signs of wear and previous use. Overall we expect it to be in very good condition, but if you are not entirely satisfied please get in touch with us.