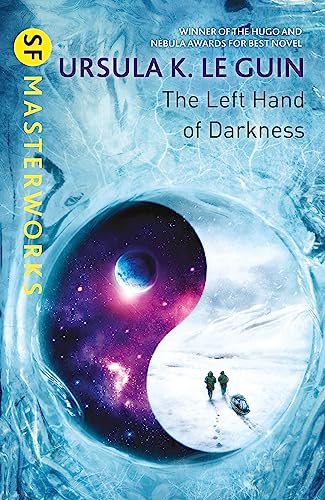 The Left Hand of Darkness
by Ursula K. Le Guin

The Hugo and Nebula Award-winning masterpiece from one of the all-time greats of Science Fiction.
'It's a giant thought experiment that's also a cracking good read about gender' Neil Gaiman

The Left Hand of Darkness Summary

The Left Hand of Darkness by Ursula K. Le Guin

Genly Ai is an ethnologist observing the people of the planet Gethen, a world perpetually in winter. The people there are androgynous, normally neuter, but they can become male ot female at the peak of their sexual cycle. They seem to Genly Ai alien, unsophisticated and confusing. But he is drawn into the complex politics of the planet and, during a long, tortuous journey across the ice with a politician who has fallen from favour and has been outcast, he loses his professional detachment and reaches a painful understanding of the true nature of Gethenians and, in a moving and memorable sequence, even finds love...

The Left Hand of Darkness Reviews

Ursula K. Le Guin is one of the finest writers of our time. Her books have attracted millions of devoted readers and won many awards, including the National Book Award, the Hugo and Nebula Awards and a Newbery Honor. Among her novels, The Left Hand of Darkness, The Dispossessed and the six books of Earthsea have attained undisputed classic status; and her recent series, the Annals of the Western Shore, has won her the PEN Center USA Children's literature award and the Nebula Award for best novel. In 2014 Ursula Le Guin was awarded the National Book Foundation Medal for Distinguished Contribution to American Letters. She lived in Portland, Oregon, until she passed away in January 2018.