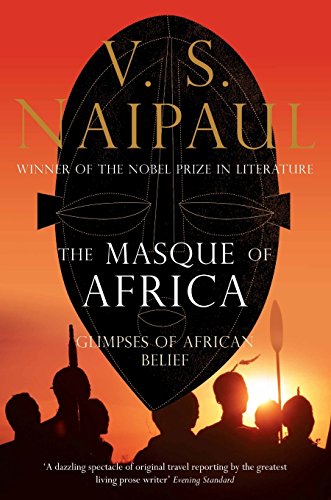 The Masque of Africa
by V. S. Naipaul

In Stock
£3.99
An astonishingly prescient, beautifully written and deeply humane work of non-fiction from the winner of the Nobel Prize in Literature.
Very Good
5 in stock

The Masque of Africa Summary

The Masque of Africa: Glimpses of African Belief by V. S. Naipaul

Moving beyond travelogue, V. S. Naipaul's The Masque of Africa considers the effects of belief (in indigenous animisms, the foreign religions of Christianity and Islam, the cults of leaders and mythical history) upon the progress of African civilization. Beginning in Uganda, at the centre of the continent, Naipaul's journey takes in Ghana and Nigeria, the Ivory Coast and Gabon, and ends, as the country does, in South Africa.

Focusing upon the theme of belief - though sometimes the political or economical realities are so overwhelming that they have to be taken into account - Naipaul examines the fragile but enduring quality of the old world of magic. To witness the ubiquity of such ancient ritual, to be given some idea of its power, was to be taken far back to the beginning of things. To reach that beginning was the purpose of this book.

`The quality of Naipaul's writing - simple, concise, engaging - rarely varies . . . Above all, Naipaul's latest African journey is eyewitness reporting at its best' Time

The Masque of Africa Reviews

Compelling, insightful, often somberly beautiful. * Sunday Telegraph *
Naipaul travels, he asks, he listens attentively and, above all else, he notices, often seeing what others do not or cannot. That acute gift has never left him . . . he is sustained by the old ideal of unadorned truth-telling. * New Statesman *
The quality of Naipaul's writing - simple, concise, engaging - rarely varies . . . Above all, Naipaul's latest African journey is eyewitness reporting at its best. * Time *

V. S. Naipaul was born in Trinidad in 1932. He came to England on a scholarship in 1950. He spent four years at University College, Oxford, and began to write, in London, in 1954. He pursued no other profession.

In 1990, V. S. Naipaul received a knighthood for services to literature; in 1993, he was the first recipient of the David Cohen British Literature Prize. He received the Nobel Prize in Literature in 2001. He lived with his wife Nadira and cat Augustus in Wiltshire, and died in 2018.

GOR003645796
The Masque of Africa: Glimpses of African Belief by V. S. Naipaul
V. S. Naipaul
Used - Very Good
Paperback
Pan Macmillan
2011-06-17
336
0330472046
9780330472043
N/A
Book picture is for illustrative purposes only, actual binding, cover or edition may vary.
This is a used book - there is no escaping the fact it has been read by someone else and it will show signs of wear and previous use. Overall we expect it to be in very good condition, but if you are not entirely satisfied please get in touch with us.