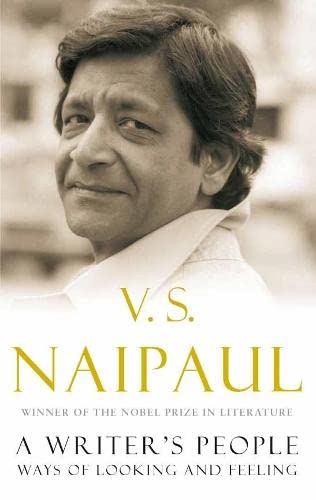 In Stock
£8.99
The Nobel Prize winner writes candidly about cultural currents, ideas, experiences and the part they play in a life of writing
Very Good Good
Only 3 left

A Writer's People: Ways of Looking and Feeling by V. S. Naipaul

Over the course of his astonishing fifty-year career, V.S. Naipaul's writing has been characterized by a commitment to truth that gives his work a unique luminosity and brilliance. In A Writer's People he brings unmatched clarity and rich experience to an exploration of the ways we think, see and feel.

The range of this extraordinary book reflects an intellect deeply engaged with the challenges of assimilation faced by the `serious traveller', one for whom there can be no single world view. Naipaul writes about the classical world - what we have retained from it, what we have forgotten - and the more recent past. Figures as diverse as Mahatma Gandhi, Derek Walcott and Gustave Flaubert come under his compassionate scrutiny, as do his own early years in Trinidad, the silences in his family history and the roles played by Anthony Powell and Francis Wyndham in his first encounters with literary culture.

Part meditation, part remembrance, as elegant as it is revelatory, A Writer's People is a privileged insight, full of gentleness, humour and feeling, into the mind of one of our greatest writers.

GOR001146341
A Writer's People: Ways of Looking and Feeling by V. S. Naipaul
V. S. Naipaul
Used - Very Good
Hardback
Pan Macmillan
2007-09-07
208
0330485245
9780330485241
N/A
Book picture is for illustrative purposes only, actual binding, cover or edition may vary.
This is a used book - there is no escaping the fact it has been read by someone else and it will show signs of wear and previous use. Overall we expect it to be in very good condition, but if you are not entirely satisfied please get in touch with us.