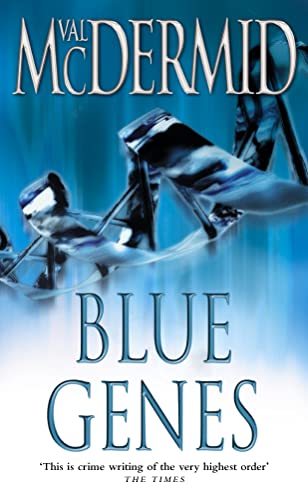 Kate Brannigan's having a bad week. Her boyfriend's death notice is in the paper and her plan to catch a team of fraudsters is in disarray.

Kate can't even cry on her best friend's shoulder, for Alexis has worries of her own. Her girlfriend's pregnant, and when the doctor responsible for the fertility treatment is murdered, Alexis needs Kate like she's never done before.

Delving into the alien world of medical experimentation, Kate confronts betrayal and cold-blooded greed as she fights to save not only her livelihood, but her life as well...

`One of my favourite authors'
Sara Paretsky

`This is crime writing of the very highest order' Marcel Berlins, The Times

GOR010173445
Blue Genes (PI Kate Brannigan, Book 5) by Val McDermid
Val McDermid
PI Kate Brannigan
Used - Like New
Paperback
HarperCollins Publishers
1997-02-24
352
0006498310
9780006498315
N/A
Book picture is for illustrative purposes only, actual binding, cover or edition may vary.
The book has been read, but looks new. The book cover has no visible wear, and the dust jacket is included if applicable. No missing or damaged pages, no tears, possible very minimal creasing, no underlining or highlighting of text, and no writing in the margins.