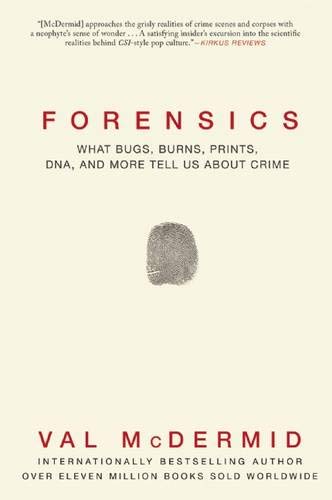 Forensics: What Bugs, Burns, Prints, DNA and More Tell Us about Crime by Val McDermid

Val McDermid is one of the finest crime writers we have, whose novels have captivated millions of readers worldwide with their riveting narratives of characters who solve complex crimes and confront unimaginable evil. In the course of researching her bestselling novels McDermid has become familiar with every branch of forensics, and now she uncovers the history of this science, real-world murders and the people who must solve them.

The dead talk--to the right listener. They can tell us all about themselves: where they came from, how they lived, how they died, and, of course, who killed them. Forensic scientists can unlock the mysteries of the past and help serve justice using the messages left by a corpse, a crime scene, or the faintest of human traces. Forensics draws on interviews with some of these top-level professionals, ground-breaking research, and McDermid's own original interviews and firsthand experience on scene with top forensic scientists.

Along the way, McDermid discovers how maggots collected from a corpse can help determine one's time of death; how a DNA trace a millionth the size of a grain of salt can be used to convict a killer; and how a team of young Argentine scientists led by a maverick American anthropologist were able to uncover the victims of a genocide. It's a journey that will take McDermid to war zones, fire scenes, and autopsy suites, and bring her into contact with both extraordinary bravery and wickedness, as she traces the history of forensics from its earliest beginnings to the cutting-edge science of the modern day.

"Fascinating . . . A gripping history of the anatomy of crime. Each of the chapters--which examine themes such as fire scene investigation, toxicology, fingerprinting, DNA and blood splatter and facial reconstruction--contains a wealth of surprising information . . . If McDermid is ever stuck for inspiration for her novels she could do worse than turn to her own book of the dead for inspiration."--The Independent (UK)

"In charting the 'astonishing leaps' that forensic science has made over the past two centuries, McDermid provides a grimly absorbing account of crime and its detection."--The Observer (UK)

"McDermid examines the creativity of forensic experts through the analytic techniques they apply to real-life crime . . . McDermid has not lost her early journalistic genius for telling a good story plainly and with passion."--Times Saturday Review (UK)

"Our fascination with crime has spawned libraries of books and years of TV programming. Val McDermid is a major player in the genre . . . She has now written a guide to criminal forensics that is every bit as compelling as the best of the fiction . . . She combines science with the macabre, from the Great Fire of London to some of the most sensational trials of recent times."--The Irish Times

"McDermid would make a good doctor, managing to be clinically precise but engaging at the same time . . . Drawing on interrogative skills learned from her first career as a journalist, the result is a highly readable, eye-opening account of the way in which criminals have slowly had their wings clipped and their getaways thwarted over the past hundred and more years."--The Herald (Scotland)

"McDermid has the ruthless psychological scalpel that forms part of the equipment of all good novelists, whatever their genre. And, fortunately for us, she knows just how to use it." --Guardian (UK)

"Val McDermid is one of the bright lights of the mystery field." --Washington Post

"One of the most accomplished crime novelists in the UK, Val McDermid has an acute reading of the psychology that lifts her out of the genre straitjacket. She delivers pulse-raising set pieces when necessary, but truthfulness of characterization is always more important than the exigencies of plot."--Independent (UK), on The Vanishing Point

"Smooth. Confident. Deeply satisfying. What else can you say about McDermid's writing?" --Entertainment Weekly (editor's choice), on The Torment of Others

"McDermid is a whiz at combining narrative threads, shifting to the viewpoints of her various characters . . . and ending chapters with cliffhangers that propel you to keep reading. . . . She's the best we've got." --New York Times Book Review, on Killing the Shadows

"To write one brilliant book is hard. To write 25 is a miracle. That is what Val McDermid has achieved over the course of her career and it's why she is a much-loved legend in the literary world." --Sunday Express (UK)

Val McDermid, a former journalist and Northern Bureau Chief of a national UK tabloid, is the best-selling author of "The Skeleton Road" and twenty-eight previous novels, three story collections, and the non-fiction book "A Suitable Job for a Woman," an inside look at female private investigators. She lives in Scotland.
GOR008829454
Forensics: What Bugs, Burns, Prints, DNA and More Tell Us about Crime by Val McDermid
Val McDermid
Used - Very Good
Hardback
Black Cat
2015-07-23
320
0802123910
9780802123916
Short-listed for Edgar Allan Poe Awards (Fact Crime) 2016
Book picture is for illustrative purposes only, actual binding, cover or edition may vary.
This is a used book - there is no escaping the fact it has been read by someone else and it will show signs of wear and previous use. Overall we expect it to be in very good condition, but if you are not entirely satisfied please get in touch with us
Trustpilot