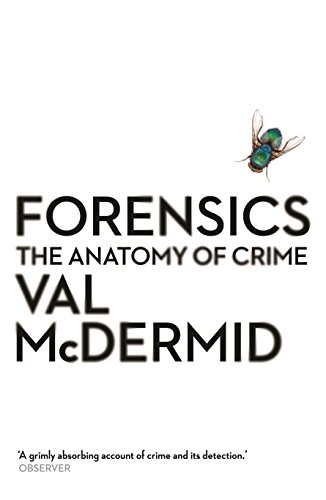 Forensics: The Anatomy of Crime by Val McDermid

The dead talk. To the right listener, they tell us all about themselves: where they came from, how they lived, how they died - and who killed them. Forensic scientists can unlock the mysteries of the past and help justice to be done using the messages left by a corpse, a crime scene or the faintest of human traces. Forensics draws on interviews with top-level professionals, ground-breaking research and Val McDermid's own experience to lay bare the secrets of this fascinating science. And, along the way, she wonders at how maggots collected from a corpse can help determine time of death, how a DNA trace a millionth the size of a grain of salt can be used to convict a killer and how a team of young Argentine scientists led by a maverick American anthropologist uncovered the victims of a genocide. In her novels, McDermid has been solving complex crimes and confronting unimaginable evil for years. Now, she's looking at the people who do it for real. It's a journey that will take her to war zones, fire scenes and autopsy suites, and bring her into contact with extraordinary bravery and wickedness, as she traces the history of forensics from its earliest beginnings to the cutting-edge science of the modern day.

McDermid has not lost her early journalistic genius for telling a good story plainly -- Ian Finlayson * Times *
... she dissects the history of forensics through gripping stories of real-life crime. * New Statesman *
Every bit as compelling as the best of the fictional genre * Irish Times *
Fascinating history of forensic science .... McDermid provides a grimly absorbing account of crime and it's detection -- Ian Thompson * Observer *
... the science of forensics has come a long way, as Val McDermid relates in this fascinating study. McDermid, best known for her gritty psychological thrillers, has interviewed a wide range (a morgue? a graveyard?) of forensic scientists and has revisited some of the most gruesome true life mysteries to piece together a gripping history of the anatomy of crime. Each of the chapters - which examine themes such as fire scene investigation, toxicology, fingerprinting, DNA and blood splatter and facial reconstruction - contains a wealth of surprising information -- Andrew Wilson * Independent *
Praise for Val McDermid: 'McDermid has the ruthless psychological scalpel that forms part of the equipment of all good novelists, whatever their genre. And, fortunately for us, she knows just how to use it. * Guardian *
The sheer brio of McDermid's writing produces that increasingly rare thing, a genuine page-turner that doesn't insult its readers' intelligence. * Independent *
To write one brilliant book is hard. To write 25 is a miracle. That is what Val McDermid has achieved over the course of her career and it's why she is a much-loved legend in the literary world. * Sunday Express *

VAL McDERMID has published twenty-eight crime novels, which have sold millions of copies worldwide, been translated into sixteen languages and won multiple awards. Her series featuring criminal profiler Tony Hill was the basis for the TV series The Wire in the Blood for ITV. Wellcome Collection is a free museum and library that aims to challenge how we think and feel about health. Inspired by the medical objects and curiosities collected by Henry Wellcome, it connects science, medicine, life and art. Wellcome Collection exhibitions, events and books explore a diverse range of subjects, including consciousness, forensic medicine, emotions, sexology, identity and death. Wellcome Collection is part of Wellcome, a global charitable foundation that exists to improve health for everyone by helping great ideas to thrive, funding over 14,000 researchers and projects in more than 70 countries. wellcomecollection.org

GOR006470680
Forensics: The Anatomy of Crime by Val McDermid
Val McDermid
Wellcome Collection
Used - Very Good
Paperback
Profile Books Ltd
2015-02-05
320
1781251703
9781781251706
N/A
Book picture is for illustrative purposes only, actual binding, cover or edition may vary.
This is a used book - there is no escaping the fact it has been read by someone else and it will show signs of wear and previous use. Overall we expect it to be in very good condition, but if you are not entirely satisfied please get in touch with us.