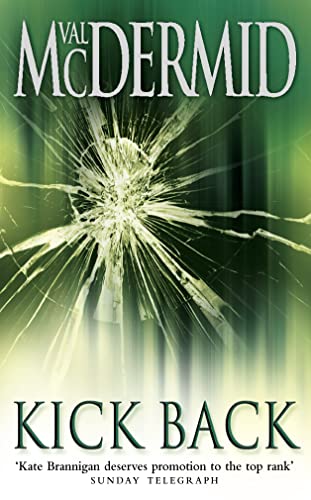 Kate Brannigan, feisty Manchester-based PI, is back, investigating the bizarre case of the missing conservatories. Before Long she's up to her neck in crooked land deals, mortgage scams, financial chicanery - and murder. But when a favour for a friend puts Kate's own life in danger, bizarre is not the first word she thinks of...

`Kate Brannigan deserves promotion to the top rank, alongside Kinsey Millhone and V.I. Warshawski. Plot, characterization, pace are all first-rate, and Brannigan is one of the most likeable of all today's PIs'
Sunday Telegraph

`A satisfying range of villains, Manchester and its environs turn deeply sinister and Brannigan toughs and wisecracks her way to a solution.'
The Times

GOR001246342
Kick Back (PI Kate Brannigan, Book 2) by Val McDermid
Val McDermid
PI Kate Brannigan
Used - Very Good
Paperback
HarperCollins Publishers
2002-10-07
288
0007142927
9780007142927
N/A
Book picture is for illustrative purposes only, actual binding, cover or edition may vary.
This is a used book - there is no escaping the fact it has been read by someone else and it will show signs of wear and previous use. Overall we expect it to be in very good condition, but if you are not entirely satisfied please get in touch with us.