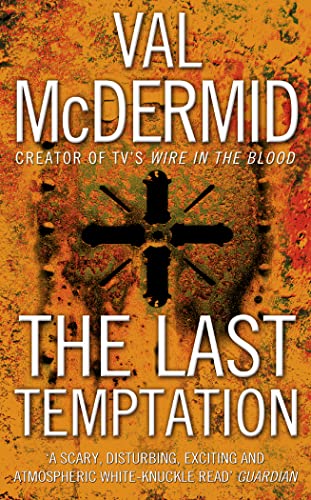 The Last Temptation
by Val McDermid

A twisted killer targeting psychologists has left a grisly trail across Europe.

Dr Tony Hill, expert at mapping the minds of murderers, is reluctant to get involved. But then the next victim is much closer to home...

Meanwhile, his former partner DCI Carol Jordan is working undercover in Berlin, on a dangerous operation to trap a millionaire trafficker. When the game turns nasty, Tony is the only person she can call on for help.

Confronting a cruelty that has its roots in Nazi atrocities, Tony and Carol are thrown together in a world of violence and corruption, where they have no one to trust but each other.

'Val McDermid is one of the few crime authors who can be convincing when it comes to 'writing tough' yet retain a powerful emotional insight... McDermid is doing something quite extraordinary with the crime fiction suspense thriller' Scotland on Sunday

'This is a hugely ambitious novel, involving three police forces, of which the British seem to be the most Machiavellian' Express

Val McDermid grew up in a Scottish mining community then read English at Oxford. She was a journalist for sixteen years, spending the last three as Northern Bureau Chief of a national Sunday tabloid. She is now a full-time writer and lives in South Manchester.

GOR000511220
The Last Temptation (Tony Hill and Carol Jordan, Book 3) by Val McDermid
Val McDermid
Tony Hill and Carol Jordan
Used - Very Good
Paperback
HarperCollins Publishers
2002-11-02
416
0007217137
9780007217137
N/A
Book picture is for illustrative purposes only, actual binding, cover or edition may vary.
This is a used book - there is no escaping the fact it has been read by someone else and it will show signs of wear and previous use. Overall we expect it to be in very good condition, but if you are not entirely satisfied please get in touch with us.