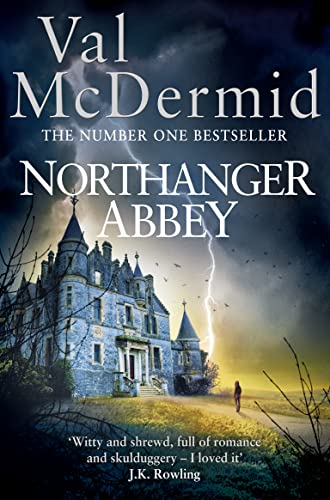 For Cat Morland life being home-schooled in Dorset is unendurably ordinary. To cope, she devours as many novels as possible, especially anything supernatural. But if Cat can tear her eyes away from the page, she's in for a shock: the very stuff of her dreams is about to come true.

An invite to the Edinburgh Festival from some wealthy neighbours throws her in the way of a mysterious young man, Henry Tilney; a like-minded friend, Isabella Thorpe; and her odious brother, who threatens to ruin Cat's chances of adventure. But this heroine is not so easily deterred, especially when she's singled out by the Tilney family to stay with them at their imposing gothic castle, Northanger Abbey.

Turrets and creaking doors there may be, but in the depths of the Scottish Borders Cat is isolated from the outside world, with no phone signal and no internet. She's all alone in an ancient abbey alive with old secrets and a family who are not quite as they seem. Is real life about to become more terrifying than the world of her imagination?

'Val McDermid's brilliant re-working of Jane Austen's original shows that innocent, bookish girls in thrall to the supernatural have changed surprisingly little in two centuries. Witty and shrewd, full of romance and skulduggery - I loved it.'
J.K. ROWLING

`I picked up Northanger Abbey one evening and didn't stop reading until I'd finished it. It's an exquisitely realised tale of the uncertainty and brutality of teenage years told with the lightness of touch and humour that Val is famous for. Utter brilliance from McDermid' SUSAN CALMAN

`McDermid's reworking of the original novel is intelligent, amusing and well-written... captures beautifully how it feels to be a teenager... McDermid is a subtle and witty writer and it's hard to imagine a better evocation of the spirit of the original.' THE TIMES

`A fun rendering... McDermid's Abbey, with its passageways and dark corners, is fantastic, and this novel is a lark.' SUNDAY TIMES

`McDermid's great virtue is to have made Austen's characters seem fresh in the way they would have been for her first readers... I can imagine Jane herself applauding.' SUNDAY EXPRESS

`Note perfect... breezy, vital, inventive... Her obvious pleasure in the task is as contagious as Austen's wit.' THE SCOTSMAN

Praise for The Austen Project:

`The Austen Project is a breathtaking tribute to Jane Austen. I can't wait to read the other five "updates" while being reminded to reread, joyfully, the originals' Washington Post

Val McDermid is the author of twenty-five bestselling novels, which have been translated into thirty languages, and have sold over ten million copies. She has won many awards internationally, including the CWA Gold Dagger for best crime novel of the year. She was inducted into the ITV3 Crime Thriller Awards Hall of Fame in 2009 and was the recipient of the CWA Diamond Dagger in 2010, awarded for sustained excellence and significant contribution to crime fiction. She has a son and a dog, and lives in the north of England.

GOR010470947
Northanger Abbey by Val McDermid
Val McDermid
Used - Like New
Paperback
HarperCollins Publishers
2014-09-22
368
0007504292
9780007504299
N/A
Book picture is for illustrative purposes only, actual binding, cover or edition may vary.
The book has been read, but looks new. The book cover has no visible wear, and the dust jacket is included if applicable. No missing or damaged pages, no tears, possible very minimal creasing, no underlining or highlighting of text, and no writing in the margins.