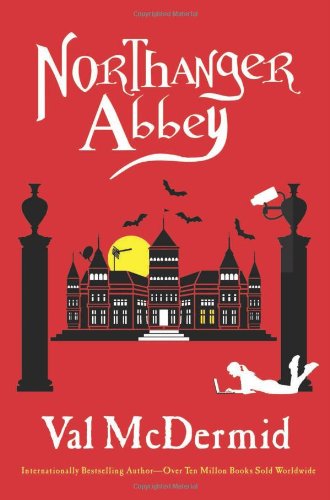 "First published in Great Britain in 2014 by The Borough Press, an imprint of HarperCollins Publishers"-- Title page verso.

Internationally best-selling crime writer Val McDermid has riveted millions of readers worldwide with her acutely suspenseful, psychologically complex, seamlessly plotted thrillers. In Northanger Abbey, she delivers her own, witty, updated take on Austen's classic novel about a young woman whose visit to the stately home of a well-to-do acquaintance stirs her most macabre imaginings, with an extra frisson of suspense that only McDermid could provide.

Cat Morland is ready to grow up. A homeschooled minister's daughter in the quaint, sheltered Piddle Valley in Dorset, she loses herself in novels and is sure there is a glamorous adventure awaiting her beyond the valley's narrow horizon. So imagine her delight when the Allens, neighbors and friends of her parents, invite her to attend the Fringe Festival in Edinburgh as their guest. With a sunny personality, tickets every night and a few key wardrobe additions courtesy of Susie Allen, Cat quickly begins to take Edinburgh by storm and is taken into the bosom of the Thorpe family, particularly by eldest daughter Bella. And then there's the handsome Henry Tilney, an up-and-coming lawyer whose family home is the beautiful and forbidding Northanger Abbey. Cat is entranced by Henry and his charming sister Eleanor, but she can't help wondering if everything about them is as perfect as it seems. Or has she just been reading too many novels? A delectable, note-perfect modern update of the Jane Austen classic, Northanger Abbey tells a timeless story of innocence amid cynicism, the exquisite angst of young love, and the value of friendship.

"The unmitigated pleasure here is the obvious relish with which McDermid relocates Austen's Regency England tale of romantic intrigue in Bath's high-society circuit and imaginatively-spun Gothic intrigue at a rural abbey to 21st-century Britain. . . . McDermid's success lies in her ability to allow her version of Northanger Abbey to dovetail tidily and enjoyably with Austen's original while infusing it with her own humor, wit, and style. . . . Long before Cat is off to the Tilneys' abbey, long before our modern-day crime author draws a final, canny ace from her tartan sleeve, you'll have succumbed to the delights of Northanger la McDermid."--Daneet Steffens, The Boston Globe

"Scottish crime writer McDermid adeptly reworks Jane Austen's Gothic satire for the modern audiences. . . . Following Austen's storyline but diverging in distinctive ways of her own, McDermid captures the naivete of the protagonist of Austen's prose. . . . Rife with conflicts of love, gossip, misunderstandings, and updates on social media, it is an accessible and enjoyable read, especially rewarding for young readers as a gateway into appreciating the classics."--Publishers Weekly

"Val McDermid . . . has the ruthless psychological scalpel that forms part of the equipment of all good novelists, whatever their genre. And, fortunately for us, she knows just how to use it."--Andrew Taylor, The Guardian (UK), on The Retribution

"McDermid is a whiz at combining narrative threads, shifting to the viewpoints of her various characters . . . and ending chapters with cliffhangers that propel you to keep reading. . . . She's the best we've got."--New York Times Book Review, on Killing the Shadows

"One of the most accomplished crime novelists in the UK, Val McDermid has an acute reading of the psychology that lifts her out of the genre strait-jacket. She delivers pulse-raising set-pieces when necessary, but truthfulness of characterization is always more important than the exigencies of plot."--Barry Forshaw, The Independent (UK), on The Vanishing Point

"Smooth. Confident. Deeply satisfying. What else can you say about McDermid's writing?"--Entertainment Weekly (editor's choice), on The Torment of Others

"Her work is taut, psychologically complex and so gripping that it puts your life on hold."--The Times (UK)

Val McDermid is the best-selling author of twenty-seven previous novels, which have been translated into over forty languages. She lives in the north of England.
GOR008796941
Northanger Abbey by Val McDermid
Val McDermid
Used - Very Good
Hardback
Grove Press / Atlantic Monthly Press
2014-04-17
343
0802123015
9780802123015
N/A
Book picture is for illustrative purposes only, actual binding, cover or edition may vary.
This is a used book - there is no escaping the fact it has been read by someone else and it will show signs of wear and previous use. Overall we expect it to be in very good condition, but if you are not entirely satisfied please get in touch with us
Trustpilot