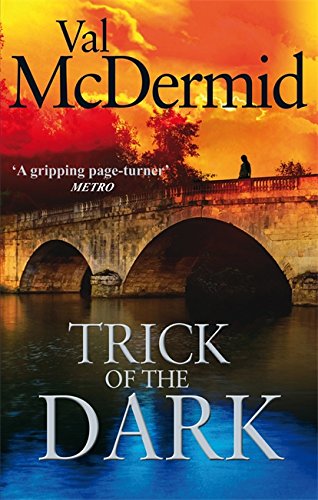 Trick Of The Dark
by Val McDermid

Used Price
£3.19
New RRP £8.99
Free Shipping in the UK
A fascinatingly rich and complex mystery lies at the heart of this novel - McDermid's most ambitious and best yet
Reviews:
Trustpilot
Very Good Good Well Read

Trick Of The Dark Summary

Trick Of The Dark by Val McDermid

When Charlie Flint is sent a mysterious package of cuttings about a brutal murder, it instantly grabs her attention. The murder occurred in the grounds of her old Oxford college - a groom battered to death just hours after his wedding. As his bride and wedding guests sipped champagne, his alleged killers were slipping his bloodstained body into the river.

Charlie doesn't know who sent the package, or why, yet she can't get the crime out of her head. But as she delves deeper, and steps back into the mysterious world of Oxford colleges, she realises that there is much more to this crime than meets the eye...

Customer Reviews - Trick Of The Dark

Trick Of The Dark Reviews

Wonderfully compelling stuff * Daily Mail *
A workout for the grey cells, perfectly executed * Daily Telegraph *
This standalone from the Scottish force of nature, and creator of Robson Green's Wire In The Blood TV series, is a brutally clever story * Daily Mirror *
Keeps you guessing till the last page * Bella *
Layered with emotional and psychological complexity, this outstanding page-turner has television success written all over it * Scottish Daily Record *
An accomplished thriller, jumping from the past to the present and back with ease, taking in a range of characters and their perspectives...Trick of the Dark had me ruminating for days * Sunday Tribune *
A broad, winding murder mystery * Sunday Telegraph *
Thoughtful, tender and always entertaining * Guardian *

GOR002467993
Trick Of The Dark by Val McDermid
Val McDermid
Used - Very Good
Paperback
Little, Brown Book Group
2011-02-17
544
0751543225
9780751543223
Short-listed for Galaxy Book Awards 2011 (UK)
Book picture is for illustrative purposes only, actual binding, cover or edition may vary.
This is a used book - there is no escaping the fact it has been read by someone else and it will show signs of wear and previous use. Overall we expect it to be in very good condition, but if you are not entirely satisfied please get in touch with us.