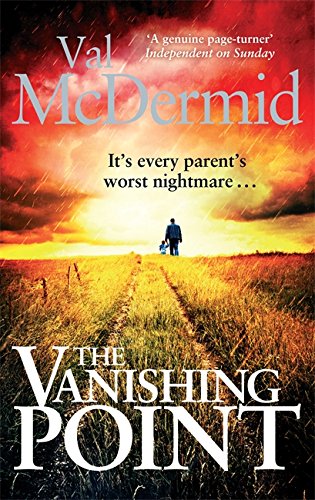 The Vanishing Point
by Val McDermid

Used Price
£3.19
New RRP £8.99
Free Shipping in the UK
It's every parent's worst nightmare - your child abducted while you look on, helpless. But five-year-old Jimmy's life is shrouded in secrets, and his mother will be forced to make the most difficult choice of her life - a choice that will affect everyone around her...
Reviews:
Trustpilot
Very Good

The Vanishing Point by Val McDermid

Stephanie Harker is travelling through security at O'Hare airport with five-year-old Jimmy. But in a moment, everything changes. In disbelief, Stephanie watches as a uniformed agent leads her boy away - and she's stuck the other side of the gates, hysterical with worry.

The authorities, unaware of Jimmy's existence, just see a woman behaving erratically; Stephanie is wrestled to the ground and blasted with a taser gun. By the time she can tell them what has happened, Jimmy is long gone.

But as Stephanie tells her story to the FBI, it becomes clear that everything is not as it seems. There are many potential suspects for this abduction. With time rapidly running out, how can Stephanie get him back?

A breathtakingly rich and gripping psychological thriller, The Vanishing Point is Val McDermid's most accomplished standalone novel to date, a work of haunting brilliance that demonstrates why she is hailed as 'the queen of crime' (The Independent).

'Masterfully handled, and McDermid's ability to wrong-foot the reader remains second to none: highly recommended' -The Guardian

'[McDermid's] work is taut, psychologically complex and so gripping that it puts your life on hold' -The Times

McDermid's ability to wrong-foot the reader remains second to none: highly recommended * Guardian *
A psychological thriller, but it's also a splendidly mordant comment on our fame culture and its consequences * The Times *
McDermid handles the various strands of the story with consummate mastery, and the reader is swept along to the story's genuinely shocking denouement * Irish Independent *
This is a gripping psychological thriller from the beginning to the unexpected ending. A first class novel and McDermid's best to date * Woman's Way Ireland *
Intelligent and hypnotically readable . . . entertaining and thought-provoking book * Spectator *
A gripping tale * Choice *
An efficiently crafted psychological thriller with an ending that knocks you sideways * Independent on Sunday *
A McDermid standalone is always an event to cherish because you don't know who you'll meet or where you'll be taken * Daily Mirror *
The strands come together and lead to an eye-blinkingly effective climax. (An) intelligent and hypnotically readable thriller...entertaining and thought provoking * Spectator *

GOR004458000
The Vanishing Point by Val McDermid
Val McDermid
Used - Very Good
Paperback
Little, Brown Book Group
2013-01-31
544
0751546100
9780751546101
Short-listed for Deanston Scottish Crime Book of the Year Award 2013 (UK)
Book picture is for illustrative purposes only, actual binding, cover or edition may vary.
This is a used book - there is no escaping the fact it has been read by someone else and it will show signs of wear and previous use. Overall we expect it to be in very good condition, but if you are not entirely satisfied please get in touch with us.