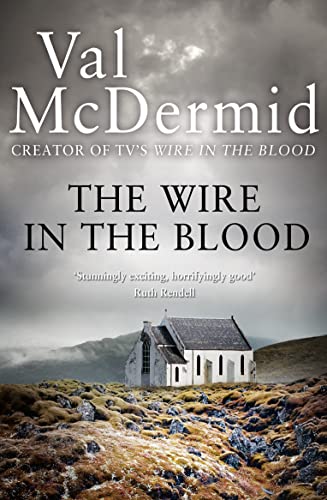 The Wire in the Blood
by Val McDermid

The Wire in the Blood Summary

The Wire in the Blood (Tony Hill and Carol Jordan, Book 2) by Val McDermid

Young girls are disappearing around the country, and there is nothing to connect them to one another, let alone the killer whose charming manner hides a warped and sick mind.

Dr Tony Hill, head of the new National Profiling Task Force, sets his team an exercise: they are given the details of missing teenagers and asked to discover any possible links between the cases. Only one officer comes up with a theory - a theory that is ridiculed by the group ... until one of their number is murdered and mutilated.

For Tony Hill, the murder becomes a matter for personal revenge and, joined by colleague Carol Jordan, he embarks on a campaign of psychological terrorism - a game where hunter and hunted can all too easily be reversed.

Customer Reviews - The Wire in the Blood

The Wire in the Blood Reviews

'The book [has] a sense of gravitas and intelligence utterly beyond lesser writers in the field ... This is a wholly satisfying read which cleverly subverts tradition and expectation' Ian Rankin, Scotland on Sunday

'This is a shocking book, stunningly exciting, horrifyingly good. It is so convincing that one fears reality may be like this and these events the awful truth' Ruth Rendell

'The Wire in the Blood is truly frightening, McDermid's capacity to enter the warped mind of a deviant criminal is shiveringly convincing ... Tony Hill, driven and disturbed, is an appealing and original character. This is a writer who just gets better and better' The Times

'Val McDermid is an accomplished storyteller, and this scary, fast-moving tale is engrossing' Daily Telegraph

GOR001782691
The Wire in the Blood (Tony Hill and Carol Jordan, Book 2) by Val McDermid
Val McDermid
Tony Hill and Carol Jordan
Used - Very Good
Paperback
HarperCollins Publishers
2010-03-04
544
0007344732
9780007344734
N/A
Book picture is for illustrative purposes only, actual binding, cover or edition may vary.
This is a used book - there is no escaping the fact it has been read by someone else and it will show signs of wear and previous use. Overall we expect it to be in very good condition, but if you are not entirely satisfied please get in touch with us.