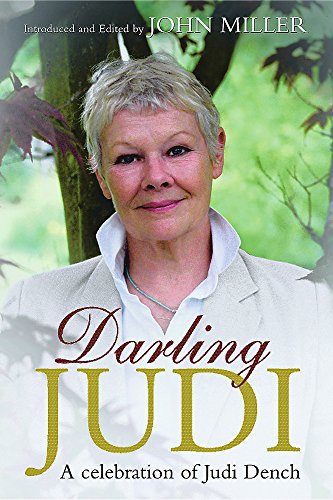 Darling Judi: A Celebration of Judi Dench by Various

The very name encourages a warm and admiring response from the public, whether as an actress admired for her Shakespearean performances or in the contemporary theatre (plays by David Hare, Hugh Whitemore etc), or on TV (the series A FINE ROMANCE and AS TIME GOES BY) or in the cinema (MRS BROWN, SHAKESPEARE IN LOVE, SHIPPING NEWS, IRIS, and four James Bond films as 'M').
Judi Dench is Britain's favourite actress. Some might make claims for Felicity Kendal or Prunella Scales, but Judi is box-office. When she and Maggie Smith - another favourite - appeared together in a David Hare play last year all seats were sold for the run within 24 hours.
John Miller has known her for ten years. His biography of Judi, published originally by W&N in 1999 and a regular reprinter in Orion pb, has now sold 92,000 copies in all editions.
For her seventieth birthday we will produce a book of tributes by fellow actors, writers - people of the theatre, film and TV in a volume edited by John Miller. Judi has promised full co-operation, including her photograph albums. The list of those confirmed so far include David Hare, Richard Eyre, Greg Doran, Trevor Nunn, Bill Nighy, Martin Jarvis, Ned Sherrin, Ian Richardson, Michael Pennington, Stanley Wells, Hugh Whitemore, Bob Larbey, Larry Guittard, Tim Pigott-Smith, Barbara Leigh-Hunt, Billy Connolly, Benedict Nightingale, Dearbhla Molloy. These will be proper contributions, pieces of up to 5,000 words.
Her life has not been all roses, not least the death two years ago of her husband, Michael Williams. The book is not a 'lovie-in'. But it will be a celebration, it will be the must-have Christmas present for her fans. In format we follow books such as those produced for John Gielgud's 80th, Alec Guinness's 70th and Olivier's 80th - beautifully-produced Royal size with 32pp of colour and black and white pix.

It consists of intimate snapshots, full of joy and irreverence and studied attempts to capture her brilliance. -- Michael Arditti * THE DAILY MAIL *
This collection of amusing and enlightening reminiscences * THEATREGOER *
a must-read. -- Roger Lewis * DAILY EXPRESS *

John Miller's career has principally been in TV and radio (for the BBC) and for ten years until 1992 for the South of England ITV company, TVS. He is the author of biographies of Ralph Richardson, and for W&N/Orion: Judi Dench and Peter Ustinov. He collaborated with John Gielgud on AN ACTOR AND HIS TIME (Pan pb).

GOR000866832
Darling Judi: A Celebration of Judi Dench by Various
Various
Used - Very Good
Hardback
Orion Publishing Co
2004-09-01
240
0297847910
9780297847915
N/A
Book picture is for illustrative purposes only, actual binding, cover or edition may vary.
This is a used book - there is no escaping the fact it has been read by someone else and it will show signs of wear and previous use. Overall we expect it to be in very good condition, but if you are not entirely satisfied please get in touch with us.