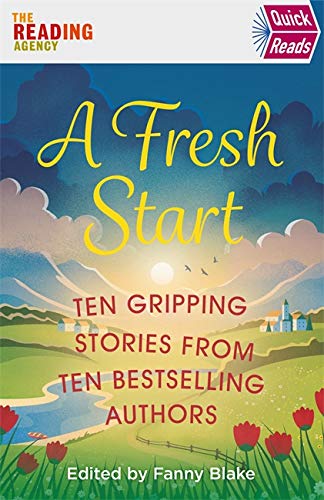 From wronged wives to nosy neighbours, from distant dads to new-found family, from secrets to lies, fresh starts to false endings - and everything in between...

A collection of brilliant short stories from the best writers around.

'I felt as though I had climbed a mountain. I was very proud because it was the first proper book I'd read' - A Quick Reads reader
Fanny Blake was a publisher for many years, editing both fiction and non-fiction before becoming a freelance journalist and writer. She has written various non-fiction titles, as well as acting as ghost writer for a number of celebrities. She was Books Editor of Woman & Home magazine until recently, regularly reviews fiction in the Daily Mail and has been a judge for the Costa Novel Award, the British Book Awards, the Comedy Women in Print Award among others. She is the commissioning editor for Quick Reads, a series of short books by well-known authors. She has written eight novels, including AN ITALIAN SUMMER and A SUMMER REUNION. Find out more at www.fannyblake.co.uk or follow her on Twitter @fannyblake1 Ian Rankin is the multimillion-copy worldwide bestseller of over thirty novels and creator of John Rebus. His books have been translated into thirty-six languages and have been adapted for radio, the stage and the screen. Rankin is the recipient of four Crime Writers' Association Dagger Awards, including the Diamond Dagger, the UK's most prestigious award for crime fiction. In the United States, he has won the celebrated Edgar Award and been shortlisted for the Anthony Award. In Europe, he has won Denmark's Palle Rosenkrantz Prize, the French Grand Prix du Roman Noir and the German Deutscher Krimipreis. He is the recipient of honorary degrees from universities across the UK, is a Fellow of The Royal Society of Edinburgh and a Fellow of The Royal Society of Literature, and has received an OBE for his services to literature. Website: IanRankin.net Twitter: @Beathhigh Facebook: IanRankinBooks Adele Parks was born in Teesside, North East England. She read English Language and Literature at Leicester University. Since graduating she has lived in Italy and Africa but has spent most of her adult life in London. She lives in Guildford with her husband and son. Her earlier novels, Playing Away, Game Over, Larger Than Life, The Other Woman's Shoes and Still Thinking of You were all best sellers and are published in over twenty countries. Mari Hannah is a multi-award-winning author whose authentic voice is no happy accident. A former probation officer, she lives in rural Northumberland with her partner, an ex-murder detective. Mari turned to script-writing when her career was cut short following an assault on duty. Her debut, The Murder Wall (adapted from a script she developed with the BBC), won her the Polari First Book Prize. Its follow-up, Settled Blood, picked up a Northern Writers' award. Her Kate Daniels series is in development with Stephen Fry's production company, Sprout Pictures. Mari's body of work won her the CWA Dagger in the Library 2017, an incredible honour to receive so early on in her career. In 2019, she was Chair for Theakston Old Peculier Crime Writing Festival and was awarded the Diva Wordsmith of the Year.
GOR010493422
9781409191957
1409191958
A Fresh Start (Quick Reads) by Various
Various
Used - Very Good
Paperback
Orion Publishing Co
2020-02-20
128
N/A
Book picture is for illustrative purposes only, actual binding, cover or edition may vary.
This is a used book - there is no escaping the fact it has been read by someone else and it will show signs of wear and previous use. Overall we expect it to be in very good condition, but if you are not entirely satisfied please get in touch with us
Trustpilot