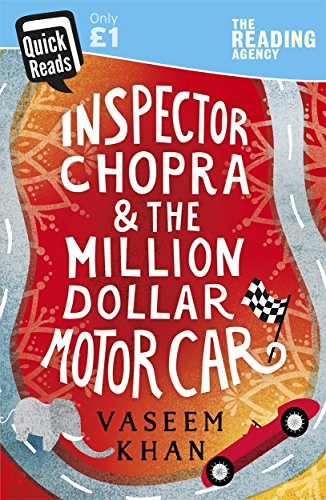 Inspector Chopra and the Million-Dollar Motor Car
by Vaseem Khan

Used Price
Free Shipping in the UK
A Quick Reads Baby Ganesh novella, in which Inspector Chopra and his elephant sidekick have two days to solve the mystery of a missing - and very costly - car.
Reviews:
Trustpilot
Very Good

An enchanting Baby Ganesh Agency short story: a million-dollar car is missing. Chopra has two days to find it, or the gangster who bought it will not be happy.

The Premier No.1 Garage is the place to go in Mumbai if you want a luxury car. Even Mumbai's biggest gangster shops there - he's just ordered a classic race car worth millions.

But now the car is gone. Stolen from a locked room, in the middle of the night.

Who stole it? The mechanic who is addicted to gambling? The angry ex-worker? The car thief pulling off one last job?

And how on earth did they make it vanish from the locked garage?

Inspector Chopra has just days to find the culprit - and the missing car - before its gangster owner finds out ... and takes violent revenge.

Praise for THE UNEXPECTED INHERITANCE OF INSPECTOR CHOPRA * . *
Keeps things heart-warming while tackling corruption at the highest levels and violent crime at the lowest. Endearing and gripping, it sets up Inspector Chopra - and the elephant - for a long series. * The Sunday Times *
A sparkling debut with a zippy plot and an endearing set of characters * The Lady *
Enchanting * Woman & Home *
Chopra, diligent, incorruptible and not entirely at ease with shiny new India, is a delight, as is his redoubtable wife, Poppy - and Ganesha the elephant, once he has cheered up a bit, proves a very useful ally indeed. Utterly charming * Guardian *
A cast of intriguing characters that it will be a joy to see develop. But the greatest strength is the setting in the teeming city of Mumbai, from which the colour and atmosphere flows out of every page in this enjoyable, whimsical tale * Daily Express *
A quirky murder mystery... full of colourful characters and insightful details about human motivation * Irish Examiner *

Vaseem Khan first saw an elephant lumbering down the middle of the road in 1997 when he arrived in India to work as a management consultant. It was the most unusual thing he had ever seen and inspired his series of crime novels.

He returned to the UK in 2006 and now works at University College London for the Department of Security and Crime Science. Every day that he is there he is astonished by the way modern science is being used to tackle crime. Elephants are third on his list of passions. Great literature and cricket come first and second, not always in that order.

GOR008858997
Inspector Chopra and the Million-Dollar Motor Car: A Baby Ganesh Agency short story by Vaseem Khan
Vaseem Khan
Used - Very Good
Paperback
Hodder & Stoughton General Division
2018-02-01
112
1473650151
9781473650152
N/A
Book picture is for illustrative purposes only, actual binding, cover or edition may vary.
This is a used book - there is no escaping the fact it has been read by someone else and it will show signs of wear and previous use. Overall we expect it to be in very good condition, but if you are not entirely satisfied please get in touch with us.