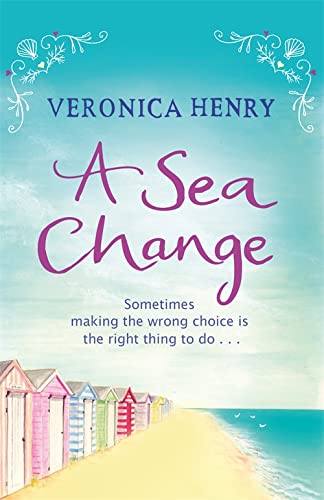 A Sea Change
by Veronica Henry

At Everdene, setting for THE BEACH HUT, two people meet, both with secrets to hide . . .
Written specially for the World Book Day Quick Reads promotion

A Sea Change by Veronica Henry

At Everdene, setting for THE BEACH HUT, two people meet, both with secrets to hide . . .
Written specially for the World Book Day Quick Reads promotion

Jenna is known as The Ice Cream Girl. She doesn't mind the name one bit. After all, it's a happy name, and there are far worse jobs than selling ice creams on Everdene beach.

Craig spends as much time as he can at the beach hut in Everdene he rents with a few of his mates. As a policeman, it is a restful change from his daily life, and he's surfing mad. One weekend he's down there on his own when he notices a girl on the beach. He's young, free and single and she catches his eye.

But on this particular summer weekend, both Jenna and Craig's lives are about to change . . .

Veronica Henry has worked as a scriptwriter for THE ARCHERS, HEARTBEAT and HOLBY CITY amongst many others, before turning to fiction. She won the 2014 RNA NOVEL OF THE YEAR AWARD for A NIGHT ON THE ORIENT EXPRESS. Veronica lives with her family in a village in north Devon. Find out more at www.veronicahenry.co.uk or follow her on Twitter @veronica_henry

GOR004517150
A Sea Change by Veronica Henry
Veronica Henry
Used - Very Good
Paperback
Orion Publishing Co
2013-02-01
96
140910401X
9781409104018
N/A
Book picture is for illustrative purposes only, actual binding, cover or edition may vary.
This is a used book - there is no escaping the fact it has been read by someone else and it will show signs of wear and previous use. Overall we expect it to be in very good condition, but if you are not entirely satisfied please get in touch with us.