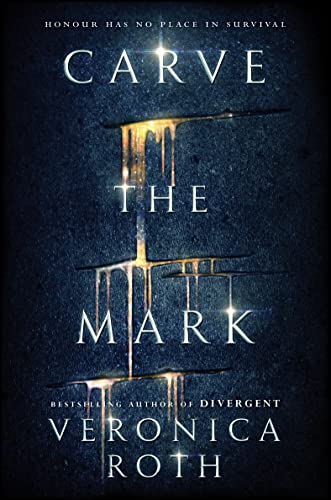 Carve the Mark
by Veronica Roth

Cyra is the sister of the brutal tyrant who rules the Shotet people. Cyra's currentgift gives her pain and power - something her brother exploits, using her to torture his enemies. But Cyra is much more than just a blade in her brother's hand: she is resilient, quick on her feet, and smarter than he knows.

Akos is from the peace-loving nation of Thuvhe, and his loyalty to his family is limitless. Though protected by his unusual currentgift, once Akos and his brother are captured by enemy Shotet soldiers, Akos is desperate to get his brother out alive - no matter what the cost. When Akos is thrust into Cyra's world, the enmity between their countries and families seems insurmountable. Will they help each other to survive, or will they destroy one another?

Carve the Mark is Veronica Roth's stunning portrayal of the power of friendship - and love - on a planet where violence and vengeance rule.

Veronica Roth is the No. 1 New York Times bestselling author of Divergent, Insurgent, Allegiant, and Four: A Divergent Collection. Ms. Roth and her husband live in Chicago.

You can visit her online at www.veronicarothbooks.com

GOR008083743
Carve the Mark (Carve the Mark, Book 1) by Veronica Roth
Veronica Roth
Carve the Mark
Used - Very Good
Hardback
HarperCollins Publishers
2017-01-17
528
0008157820
9780008157821
N/A
Book picture is for illustrative purposes only, actual binding, cover or edition may vary.
This is a used book - there is no escaping the fact it has been read by someone else and it will show signs of wear and previous use. Overall we expect it to be in very good condition, but if you are not entirely satisfied please get in touch with us.