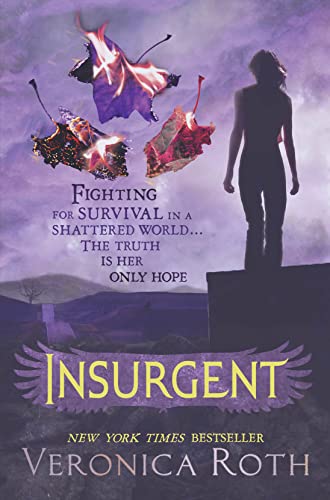 Fighting for survival in a shattered world... the truth is her only hope.

Fighting for survival in a shattered world... the truth is her only hope.

I have done bad things. I can't take them back, and they are part of who I am.

Tris has survived a brutal attack on her former home and family. But she has paid a terrible price. Wracked by grief and guilt, she becomes ever more reckless as she struggles to accept her new future.

Yet if Tris wants to uncover the truth about her world, she must be stronger than ever... because more shocking choices and sacrifices lie ahead.

"The next big thing." (Rolling Stone )

"If you like Hunger Games & Twilight, then get stoked for DIVERGENT! Trust us on this-this baby is going to blow up BIG! And if you chose to remain factionless, then you're gonna be one lonely soul." (PerezHilton.com )

"A taut and shiveringly exciting read! Tris is exactly the sort of unflinching and fierce heroine I love. I couldn't turn the pages fast enough." Melissa Marr, bestselling author of Wicked Lovely

"DIVERGENT is a captivating, fascinating book that kept me in constant suspense and was never short on surprises. It will be a long time before I quit thinking about this haunting vision of the future." James Dashner, author of `The Maze Runner'

"Well-written and brilliantly executed, DIVERGENT is a heart-pounding debut that cannot be missed. Tris stands out in her action-packed, thrilling, and emotionally honest journey to determine who she wants to be in a society that demands she conform. It's dystopian fiction at its best!" Kiersten White, New York Times bestselling author of PARANORMALCY

"A memorable, unpredictable journey from which it is nearly impossible to turn away" - Publishers Weekly

"Divergent holds its own in the [dystopian] genre, with brisk pacing, lavish flights of imagination and writing that occasionally startles with fine detail." - New York Times

" A masterpiece of epic proportions and an outstanding debut novel." - Narratively Speaking Blog

"Be prepared to sit on the edge of your seats as this heart-pounding thriller hypnotises you until the very last page." - Fantasticbookreviews.com

Veronica Roth is the No. 1 New York Times bestselling author of Divergent, Insurgent and Allegiant - the Divergent trilogy. Now a full-time writer, Ms. Roth and her husband live in Chicago. You can visit her online at Twitter, Tumblr, her blog, and her website.

GOR006964366
Insurgent (Divergent, Book 2) by Veronica Roth
Veronica Roth
Divergent
Used - Like New
Paperback
HarperCollins Publishers
2012-05-01
576
0007442920
9780007442928
N/A
Book picture is for illustrative purposes only, actual binding, cover or edition may vary.
This is a used book - there is no escaping the fact it has been read by someone else and it will show signs of wear and previous use. Overall we expect it to be in very good condition, but if you are not entirely satisfied please get in touch with us.