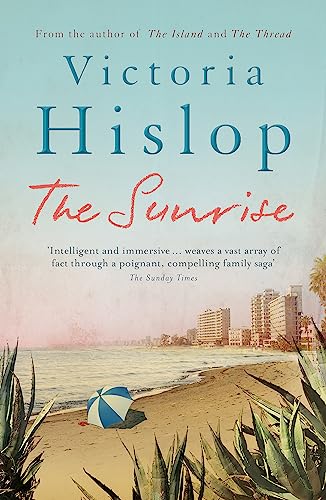 The Sunrise
by Victoria Hislop

The Sunrise by Victoria Hislop

The No. 1 Sunday Times bestseller

In the summer of 1972, Famagusta in Cyprus is the most desirable resort in the Mediterranean, a city bathed in the glow of good fortune. An ambitious couple open the island's most spectacular hotel, where Greek and Turkish Cypriots work in harmony. Two neighbouring families, the Georgious and the OEzkans, are among many who moved to Famagusta to escape the years of unrest and ethnic violence elsewhere on the island. But beneath the city's facade of glamour and success, tension is building.
When a Greek coup plunges the island into chaos, Cyprus faces a disastrous conflict. Turkey invades to protect the Turkish Cypriot minority, and Famagusta is shelled. Forty thousand people seize their most precious possessions and flee from the advancing soldiers. In the deserted city, just two families remain. This is their story.

'Vibrant... Hislop brings history to life in this compelling tale' * Tatler *
Hislop brings her consummate storytelling skills to this enthralling tale of love, marriage and a community all put to the test * Woman & Home *
Heartbreaking... A fascinating insight into a part of Mediterranean history that isn't often explored * Essentials *

An imaginative tour de force, and a great read

* Daily Mail *
Fascinating * Sunday Mirror *
Hislop's writing effectively weaves the personal into the political without ever becoming overbearing. An informative but equally emotional read * Woman *
Fascinating and moving... Hislop writes unforgettably about Cyprus and its people * The Times *
An absorbing tale about family, friendship, loyalty and betrayal, set during a violent period in the history of Cyprus * Good Housekeeping *
Intelligent and immersive... Hislop's incisive narrative weaves a vast array of fact through a poignant, compelling family saga * The Sunday Times *
'Some beautiful writing about a difficult period in time makes for a great read' * Sun *
Adroitly plotted and deftly characterised, Hislop's gripping novel tells the stories of ordinary Greek and Turkish families trying to preserve their humanity in a maelstrom of deception, betrayal and ethnic hatred * Mail on Sunday *

One of the best things about this novel is the way Hislop depicts the growing teamwork, love, respect, and trust which two families of opposite persuasions manage to establish

Inspired by a visit to Spinalonga, the abandoned Greek leprosy colony, Victoria Hislop wrote The Island in 2005. It became an international bestseller and a 26 part Greek TV series. She was named Newcomer of the Year at the British Book Awards and is now an ambassador for Lepra. Her affection for the Mediterranean then took her to Spain, and in The Return she wrote about the painful secrets of its civil war. In her third novel, The Thread, Victoria returned to Greece to tell the turbulent tale of Thessaloniki and its people across the 20th century. Published to widespread acclaim, it was shortlisted for a British Book Award, and was followed by her much-admired Greece-set short story collection, The Last Dance and Other Stories.

GOR006715974
The Sunrise by Victoria Hislop
Victoria Hislop
Used - Very Good
Paperback
Headline Publishing Group
2015-06-04
432
075537780X
9780755377800
N/A
Book picture is for illustrative purposes only, actual binding, cover or edition may vary.
This is a used book - there is no escaping the fact it has been read by someone else and it will show signs of wear and previous use. Overall we expect it to be in very good condition, but if you are not entirely satisfied please get in touch with us.