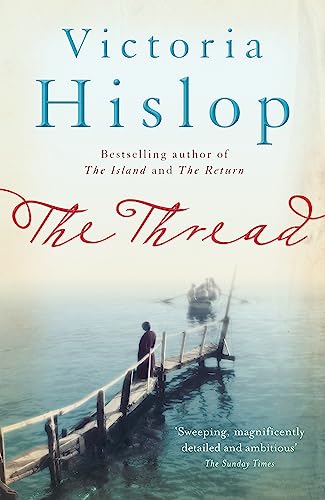 The Thread
by Victoria Hislop

The Thread by Victoria Hislop

The enthralling novel from Victoria Hislop, the million-copy bestselling author of THE ISLAND and THE RETURN.

Thessaloniki, 1917. As Dimitri Komninos is born, a devastating fire sweeps through the thriving Greek city where Christians, Jews and Muslims live side by side. Five years later, Katerina Sarafoglou's home in Asia Minor is destroyed by the Turkish army. Losing her mother in the chaos, she flees across the sea to an unknown destination in Greece. Soon her life will become entwined with Dimitri's, and with the story of the city itself, as war, fear and persecution begin to divide its people.

Thessaloniki, 2007. A young Anglo-Greek hears his grandparents' life story for the first time and realises he has a decision to make. For many decades, they have looked after the memories and treasures of the people who were forced to leave. Should he become their next custodian and make this city his home?

'Enjoyable, thought-provoking and poignant' * Scottish Woman magazine *
'Sweeping, magnificently detailed and ambitious' * The Sunday Times *
'Fast-paced narrative and utterly convincing sense of place' * Guardian *
'Fresh, tenacious and rather intrepid' * Independent *
'This is storytelling at its best and just like a tapestry, when each thread is sewn into place, so emerge the layers and history of relationships past and present' * Sunday Express *
Her best novel yet * Scotsman *
'A brilliant page turner and destined to become a reading group staple, THE THREAD is rich with drama and historical detail' * Glamour *
'Meticulously researched and compellingly told' * Woman & Home *
'An evocative exploration of the past's hold on a family, with an exquisite love story at its centre' * Good Housekeeping *
'A book to lose yourself in' * We Love This Book *

Victoria Hislop read English at Oxford, and worked in publishing, PR and as a journalist before becoming a novelist. She is married with two children. Her first novel, THE ISLAND, held the Number One slot in the Sunday Times paperback chart for eight consecutive weeks and has sold over two million copies worldwide. Victoria acted as script consultant on a 26-part TV adaptation in Greece, which achieved record ratings for Greek television. Victoria was the Newcomer of the Year at the Galaxy British Book Awards 2007, and her second novel, THE RETURN, was also a Number One bestseller. THE THREAD spent nine weeks in the Sunday Times hardback chart, and was widely acclaimed. Her books have been translated into more than 25 languages. Victoria also writes short stories and her first collection, ONE CRETAN EVENING, is available as an ebook.

GOR003798384
The Thread by Victoria Hislop
Victoria Hislop
Used - Very Good
Paperback
Headline Publishing Group
2012-05-24
480
0755377753
9780755377756
N/A
Book picture is for illustrative purposes only, actual binding, cover or edition may vary.
This is a used book - there is no escaping the fact it has been read by someone else and it will show signs of wear and previous use. Overall we expect it to be in very good condition, but if you are not entirely satisfied please get in touch with us.