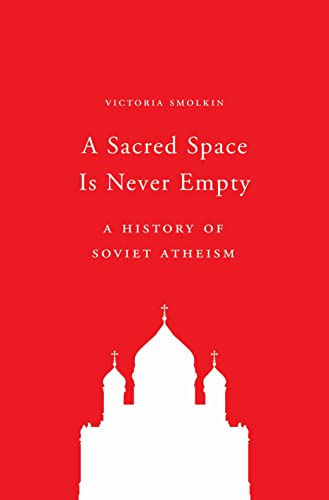 A Sacred Space Is Never Empty
by Victoria Smolkin

A Sacred Space Is Never Empty: A History of Soviet Atheism by Victoria Smolkin

When the Bolsheviks set out to build a new world in the wake of the Russian Revolution, they expected religion to die off. Soviet power used a variety of tools--from education to propaganda to terror-to turn its vision of a Communist world without religion into reality. Yet even with its monopoly on ideology and power, the Soviet Communist Party never succeeded in overcoming religion and creating an atheist society.

A Sacred Space Is Never Empty presents the first history of Soviet atheism from the 1917 revolution to the dissolution of the Soviet Union in 1991. Drawing on a wealth of archival material and in-depth interviews with those who were on the front lines of Communist ideological campaigns, Victoria Smolkin argues that to understand the Soviet experiment, we must make sense of Soviet atheism. Smolkin shows how atheism was reimagined as an alternative cosmology with its own set of positive beliefs, practices, and spiritual commitments. Through its engagements with religion, the Soviet leadership realized that removing religion from the "sacred spaces" of Soviet life was not enough. Then, in the final years of the Soviet experiment, Mikhail Gorbachev-in a stunning and unexpected reversal-abandoned atheism and reintroduced religion into Soviet public life.

A Sacred Space Is Never Empty explores the meaning of atheism for religious life, for Communist ideology, and for Soviet politics.

"Smolkin's profound book . . . allows us to see not only the struggle of atheists against religion in the Soviet Union, but also to formulate some important conclusions about the Soviet society. This is one of the decade's most successful and important scholarly works on this topic."---Nikolay Mitrokhin, Bremen University
"Smolkin makes a major contribution to the study of religion and of ideology in the late Soviet period. She demonstrates effectively that ideology did matter to the Soviet project, even-indeed especially-in the Brezhnev era, and that religion served as the barometer of ideological health. . . . A real strength of Smolkin's analysis is precisely the connection she makes to the broader ideological problem of indifference and commitment. Whereas several recent works have rightly sought to bring Soviet antireligious measures into the broader scholarly discussion of secularization and state secularism, Smolkin rightly demonstrates that secularization in the sense of removal of religion from public life or indifference to religion was not the objective of the Soviet regime. Rather, the goal was belief in a sacred antireligion, a convinced atheism. This important book should be read by all scholars interested in religion in the USSR, ideology in the late Soviet period, and secularization and secularism in the twentieth century."---Heather J. Coleman, Journal of the American Academy of Religion
"Honorable Mention for the Wayne S. Vucinich Book Prize, Association for Slavic, East European, and Eurasian Studies"
"[The] historical backdrop of Russia's remarkable journey from Orthodoxy to atheism, and back again, is chronicled in Victoria Smolkin's A Sacred Space is Never Empty: A History of Soviet Atheism. It is the first full account of Soviet atheism, from the Bolshevik revolution in 1917 to the dissolution of the USSR in 1991. This engaging book is full of striking analysis and counterintuitive insights."---Gene Zubovich, Religion & Politics
"In her fascinating overview, Smolkin demonstrates the paradoxical nature of the atheistic propaganda in the Soviet Union. . . . Smolkin's book, which is based on the deep investigation of the variety of documents representing the ideas and spirit of the propagandists of Soviet atheism, considerably supplements our understanding of the interdependence of religion and atheism in the Soviet domain."---Elena A. Stepanova, Journal of Religion in Europe
"Lively and often entertaining prose."---Catriona Kelly, Times Literary Supplement
"Atheism appears to be a straightforward concept, but for Soviet communists it was not. Victoria Smolkin's A Sacred Space Is Never Empty: A History of Soviet Atheism explores how the meaning and implementation of atheism were debated and redefined over the course of the entire history of the Soviet Union. . . . Like many recent monographs on Soviet history, this book provides a new answer for why Soviet communism failed. But Smolkin does not provide one piece to that puzzle; she provides the piece. For atheism's failure in the Soviet Union was intrinsically entwined with communism's. . . . This beautifully written book-which addresses universal themes such as why there is a need for religion in a modern society-will be of interest to a wide array of readers in any field."---Laurie Manchester, American Historical Review
"Delivered in a highly readable narrative, [Smolkin's] cogent analysis and challenging conclusions offer much to historians of religion and the Soviet Union: there is also no doubt that students and the interested general public will find the work intriguing and illuminating."---James M. White, European History Quarterly
"One of the greatest strengths of Smolkin's book is the varied and comprehensive nature of the materials she draws on. Having worked in state and party archives, surveyed atheist publications, and interviewed key figures from the Soviet study of religion, Smolkin is able to provide an overview of atheist work that has no parallel in the current literature. This well-written book makes essential reading for anyone interested in the history of Soviet ideology or in comparative histories of modern religion and secularization."---Sonja Luehrmann, Canadian Slavonic Papers
"Much has been written about the Soviet Union's war on religion and its vigorous efforts to set up atheism and the Bolshevik revolutionary project as a new faith. Most such accounts treat religion and atheism as simple opposites. Smolkin describes a more nuanced and variable relationship between them."---Robert Legvold, Foreign Affairs
"The book is written in an accessible way . . . Smolkin offers highly interesting insights from her research in Eastern European archives and interviews, conducted in Russia and Ukraine during 2008 and 2013, relevant not only for scholars of religion and history, but also for an interested audience."---Christian Foeller, Religion and Society in Central and Eastern Europe
"Victoria Smolkin's important new study of the history of Soviet atheism places the state's fluid, quasi-adaptive approaches to eradicating religion at the center of a story about the communist party's failure to fully win over the hearts and minds of ordinary people. This book beautifully fills an empty space, and will be of great value to scholars and students across all disciplines in our field."---Yvonne Howell, University of Richmond
"Learning about atheism is a fascinating way to enrich one's knowledge of religion, and vice versa; Smolkin reminds us that the boundaries between conceptual social categories are more porous than we often realize or admit . . . . Smolkin's impressive first book broadens our perspective on what qualifies as "sacred," and educates us on the power and limitations of human conviction in driving the great cycles of historical change."---Anais Garvanian, The Graduate Journal of Harvard Divinity School

Victoria Smolkin is assistant professor of history at Wesleyan University.

GOR010722532
A Sacred Space Is Never Empty: A History of Soviet Atheism by Victoria Smolkin
Victoria Smolkin
Used - Very Good
Paperback
Princeton University Press
2019-10-29
360
0691197237
9780691197234
N/A
Book picture is for illustrative purposes only, actual binding, cover or edition may vary.
This is a used book - there is no escaping the fact it has been read by someone else and it will show signs of wear and previous use. Overall we expect it to be in very good condition, but if you are not entirely satisfied please get in touch with us.