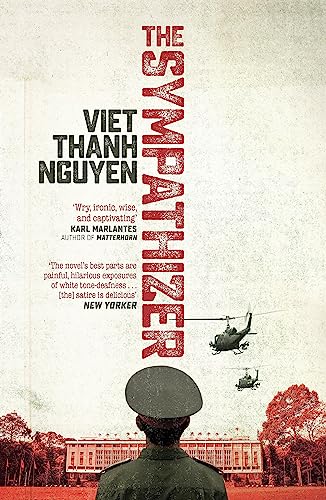 The Sympathizer
by Viet Thanh Nguyen

Used Price
£3.79
New RRP £8.99
Free Shipping in the UK
A profound, startling, and beautifully crafted debut novel, The Sympathizer is the story of a man of two minds, offering a unique perspective on the Vietnam war. Destined to become a modern classic
Reviews:
Trustpilot
Very Good Good Well Read

The Sympathizer: Winner of the Pulitzer Prize for Fiction by Viet Thanh Nguyen

WINNER OF THE PULITZER PRIZE FOR FICTION 2016

It is April 1975, and Saigon is in chaos. At his villa, a general of the South Vietnamese army is drinking whiskey and, with the help of his trusted captain, drawing up a list of those who will be given passage aboard the last flights out of the country. The general and his compatriots start a new life in Los Angeles, unaware that one among their number, the captain, is secretly observing and reporting on the group to a higher-up in the Viet Cong. The Sympathizer is the story of this captain: a man brought up by an absent French father and a poor Vietnamese mother, a man who went to university in America, but returned to Vietnam to fight for the Communist cause. A gripping spy novel, an astute exploration of extreme politics, and a moving love story, The Sympathizer explores a life between two worlds and examines the legacy of the Vietnam War in literature, film, and the wars we fight today.

[A] remarkable debut novel ... His book fills a void in the literature, giving voice to the previously voiceless ... An absurdist tour de force that might have been written by a Kafka or Genet * New York Times Book Review *
Extraordinary ... Surely a new classic of war fiction ... [Nguyen] has written a cerebral thriller around a desperate expat story that confronts the existential dilemmas of our age ... I haven't read anything since Orwell's Nineteen Eighty-Four that illustrates so palpably how a patient tyrant, unmoored from all human constraint, can reduce a man's mind to liquid * Washington Post *
This debut is a page-turner (read: everybody will finish) that makes you reconsider the Vietnam War ... Nguyen's darkly comic novel offers a point of view about American culture that we've rarely seen * Oprah.com (Oprah's Book Club Suggestions) *
The satire is delicious * New Yorker *
The Sympathizer reads as part literary historical fiction, part espionage thriller and part satire. Nguyen knows of what he writes * Los Angeles Times *
An important new perspective on the Vietnam War . . . The Sympathizer will both startle and grip you * BuzzFeed *
An early frontrunner for debut novel of the year * Flavorwire (10 Must-Read Books for April) *
I cannot remember the last time I read a novel whose protagonist I liked so much. Smart, funny, and self-critical, with a keen sense of when to let a story speak for itself ... [Nguyen] proves a gifted and bold satirist * Barnes & Noble Review *
Arresting . . . One of the best pieces of fiction about the Vietnam war-and by a Vietnamese. . . . Stunning . . . Could it be that Nguyen has captured the shape of the devolution of war itself, from grand ambition to human ruin? . . . One of the finest novels of the Vietnam War published in recent years * Daily Beast *
Read this novel with care; it is easy to read, wry, ironic, wise, and captivating, but it could change not only your outlook on the Vietnam War, but your outlook on what you believe about politics and ideology in general. It does what the best of literature does, expands your consciousness beyond the limitations of your body and individual circumstances * Karl Marlantes, author of Matterhorn and What It Is Like to Go to War *
Magisterial. A disturbing, fascinating and darkly comic take on the fall of Saigon and its aftermath, and a powerful examination of guilt and betrayal. The Sympathizer is destined to become a classic and redefine the way we think about the Vietnam War and what it means to win and to lose * T.C. Boyle, author of The Tortilla Curtain *
[A] dark and exciting debut novel ... Black humour seeps through these pages * Wall Street Journal *
Not only does Viet Thanh Nguyen bring a rare and authentic voice to the body of American literature generated by the Vietnam War, he has created a book that transcends history and politics and nationality and speaks to the enduring theme of literature: the universal quest for self, for identity. The Sympathizer is a stellar debut by a writer of depth and skill * Robert Olen Butler, Pulitzer Prize-winning author of A Good Scent from a Strange Mountain *
Beautifully written and meaty * Claire Messud *
A fierce novel written in a refreshingly high style and charged with intelligent rage. * Financial Times *
This impressive debut contains a Whitman-like multiplicity ... A bold, artful and globally minded reimagining of the Vietnam war ... The Sympathizer is an excellent literary novel, and one that ends, with unsettling present-day resonance, in a refugee boat where opposing ideas about intentions, actions and their consequences take stark and resilient human form. * Guardian, Randy Boyagoda *

Viet Thanh Nguyen is the author of the nonfiction book Nothing Ever Dies: Vietnam and the Memory of War. The Sympathizer has won numerous awards, including the Andrew Carnegie Medal for Excellence in Fiction. He teaches English and American Studies at the University of Southern California and lives in Los Angeles.

GOR007569887
The Sympathizer: Winner of the Pulitzer Prize for Fiction by Viet Thanh Nguyen
Viet Thanh Nguyen
Used - Very Good
Paperback
Little, Brown Book Group
2016-04-12
384
1472151364
9781472151360
Winner of Andrew Carnegie Medal for Excellence in Fiction 2016 (UK) Winner of Pulitzer Price for Fiction 2016 (UK) Short-listed for Edgar Best First Novel Prize 2016 (UK) Short-listed for International Dublin Literary Award 2017 (UK)
Book picture is for illustrative purposes only, actual binding, cover or edition may vary.
This is a used book - there is no escaping the fact it has been read by someone else and it will show signs of wear and previous use. Overall we expect it to be in very good condition, but if you are not entirely satisfied please get in touch with us.