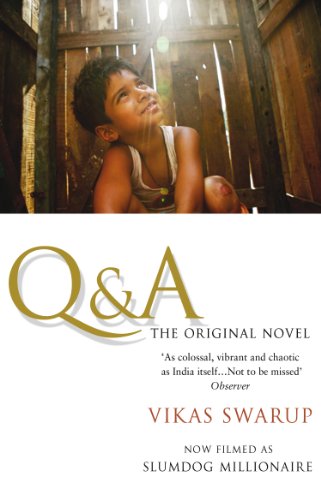 Q & A
by Vikas Swarup

Q & A: The International Bestseller Filmed as Slumdog Millionaire by Vikas Swarup

The bestselling book behind the Oscar-winning film SLUMDOG MILLLIONAIRE directed by Danny Boyle 'An absorbing and richly entertaining read' Times Former tiffinboy Ram Mohammad Thomas has just got twelve questions correct on a TV quiz-show to win a cool one billion rupees. But he is brutally slung in prison on suspicion of cheating. Because how can a kid from the slums know who Shakespeare was, unless he is cheating? In the order of the questions on the show, Ram tells us which incredible adventures in his life on the streets gave him the answers. From orphanages to brothels, gangsters to beggar-masters, and into the homes of Bollywood's rich and famous, Ram's story is brimming with the chaotic comedy, heart-stopping tragedy and joyousness of modern India. 'Popular fiction at its best and brightest' Guardian 'Colourful' Sunday Telegraph 'Poignant, funny, rich' MEG ROSOFF, bestselling author of HOW I LIVE NOW 'Not to be missed' Observer

"This brilliant story, as colossal, vibrant and chaotic as India itself... is not to be missed" * Observer *
"Poignant, funny, rich... with an utterly orignal and brilliant structure at its heart" -- Meg Rosoff, author of HOW I LIVE NOW
"Mingling broad humour with incisive social comment, Q&A is absorbing and richly entertaining reading" * The Times *
"This lively picaresque novel has an original and telling premise... a colourful portrait of Indian society is painted with remarkable lightness and wit" * Sunday Telegraph *
"A hugely successful mixture of satire and intrigue" * Independent on Sunday *
"Swarup is an accomplished storyteller" * Daily Mail *
"An engaging and surprisingly informative read" * Telegraph *
"This novel is part homage to the larger-than-life Bollywood film industry, and the characters and story are so engaging that you really have to read on to find out how it all comes together in the end" * Derby Evening Telegraph *
"One of the most delightful reads i've enjoyed in years" * Shashi Tharoor *
"Q&A is popular fiction at its best and brightest. The prose is efficient and the characters are briskly drawn in strong, sharp colours. Swarup clearly understands his job. As an exercise in genre, the novel is a triumph and that was before the movie-makers got to work" -- Robert McCrum * Guardian *

Vikas Swarup is a member of the Indian Foreign Service and is based in Delhi. Q&A has won many awards, and is translated into 40 languages so far. It is the book behind the mult-Oscar winning film, Slumdog Millionaire. His second novel, Six Suspects, is available as a Black Swan paperback and ebook and is soon to be made into a film.

GOR001170789
Q & A: The International Bestseller Filmed as Slumdog Millionaire by Vikas Swarup
Vikas Swarup
Used - Very Good
Paperback
Transworld Publishers Ltd
2006-01-30
384
055277250X
9780552772501
Winner of Heathrow Travel Product Award: Travel Read, Fiction 2009
Book picture is for illustrative purposes only, actual binding, cover or edition may vary.
This is a used book - there is no escaping the fact it has been read by someone else and it will show signs of wear and previous use. Overall we expect it to be in very good condition, but if you are not entirely satisfied please get in touch with us.