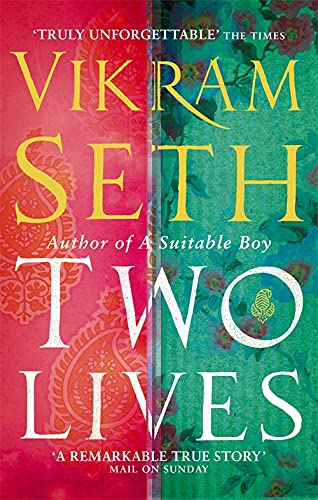 In Stock
£4.49
* A story of love and survival amidst the great events of the twentieth century.
Very Good Good
6 in stock

TWO LIVES tells the remarkable story of Seth's great uncle and aunt. His great uncle Shanti left India for medical school in Berlin in the 1930s and lodged with a German Jewish family. In the household was a daughter, Henny, who urged her mother 'not to take the blackie'. But a friendship developed and each managed to leave Germany and found their way to Britain as the Nazis rose to power. Shanti joined the army and lost his right arm at the battle of Monte Cassino, while Henny (whose family were to die in the camps) made a life for herself in her adopted country. After the war they married and lived the emigre life in north London where Shanti, despite the loss of his arm, became a much-loved dentist. During his own adolescence in England, Vikram Seth lived with Shanti and Henny and came to know and love them deeply. His is the third life in this story of TWO LIVES. This is also a book about history, encompassing as it does many of the most significant themes and events in the 20th century, whose currents are reflected in the lives of Shanti, Henny and their family: from the Raj and the Indian freedom movement to the Third Reich, the Holocaust and British postwar society.

This is an accomplished and profoundly moving work * DAILY TELEGRAPH *
Written as an act of love and duty it is a testament to his modesty and familial affection. * SUNDAT TIMES *
A fascinating and honest read. * TRIBUNE *
Seth is a thorough biographer, but his considerable narrative skill is as evident here as it is in his fiction... One of the beauties of TWO LIVES is that it transcends its subject matter, becoming a celebration of endurance, a recognition of all lives pun * SUNDAY BUSINESS POST *

Vikram Seth was born in India. He was educated there and in England, China and the USA. He has written great books in every genre: verse novel (THE GOLDEN GATE); travel book (FROM HEAVEN LAKE winner Thomas Cook Travel Book Award); epic masterpiece (A SUITABLE BOY).

GOR000274750
Two Lives by Vikram Seth
Vikram Seth
Used - Very Good
Paperback
Little, Brown Book Group
2006-07-06
512
0349117985
9780349117980
N/A
Book picture is for illustrative purposes only, actual binding, cover or edition may vary.
This is a used book - there is no escaping the fact it has been read by someone else and it will show signs of wear and previous use. Overall we expect it to be in very good condition, but if you are not entirely satisfied please get in touch with us.