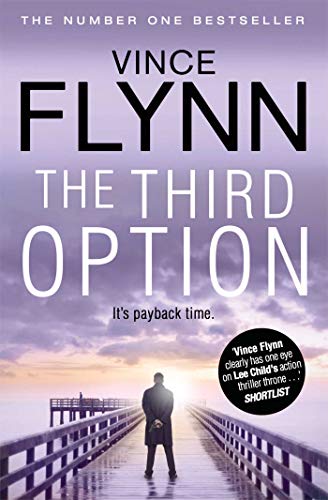 The Third Option
by Vince Flynn

Used Price
Free Shipping in the UK
Mitch Rapp is sent on his final mission But he doesn't know that the ultimate target of this mission is himself.
Reviews:
Trustpilot
Very Good

The Third Option by Vince Flynn

Mitch Rapp, the CIA's top counterterrorism operative, is sent on his final mission, to eliminate a European industrialist who has been selling sensitive equipment to one of terrorism's most notorious sponsors. But he doesn't know that the ultimate target of this mission is himself.

Set up by forces within the US who do not want the next Director-elect of the CIA to take over, and therefore need a disaster for the present regime, Mitch refuses to die ... the conspirators have made an awful miscalculation. They have enraged one of the most lethal and efficient killers the CIA has ever produced. Now they will pay.

Praise for the Mitch Rapp series
'Sizzles with inside information and CIA secrets' Dan Brown
'A cracking, uncompromising yarn that literally takes no prisoners' The Times
'Vince Flynn clearly has one eye on Lee Child's action thriller throne with this twist-laden story. . . instantly gripping' Shortlist
'Action-packed, in-your-face, adrenalin-pumped super-hero macho escapist fiction that does exactly what it says on the label' Irish Independent

Praise for Vince Flynn THE THIRD OPTION 'A sensational novel that will add more critical acclaim to a writer at his peak' Publishing News 'Page-Turner of the week' People Magazine 'Flynn's high-energy prose sets a terrific pace, and he generates plenty of suspense' Booklist TRANSFER OF POWER 'Right out of today's headlines ... A wonderful romp through the halls of power ... The action is bloody good and the concluding chapters are complex, chilling and satisfying.' The Plain Dealer (Cleveland) 'Flynn keeps the action moving' Houston Chronicle 'Moves at breakneck speed ... you won't be able to put it down' Times Record News (Wichita Falls, TX) TERM LIMITS 'A page-turning read' Larry King, USA Today 'A roller-coaster, edge-of-your-seat thriller with loads of insider lowdown on D.C. politics' Minneapolis Star Tribune 'Ingenious ... outpaces anything recently published, including Clancy' The Florida Times-Union

Vince Flynn's fifteen thrillers have been published in twenty countries. Visit his website at www.vinceflynn.com.

GOR003514167
The Third Option by Vince Flynn
Vince Flynn
The Mitch Rapp Series
Used - Very Good
Paperback
Simon & Schuster Ltd
2011-09-01
512
1849835616
9781849835619
N/A
Book picture is for illustrative purposes only, actual binding, cover or edition may vary.
This is a used book - there is no escaping the fact it has been read by someone else and it will show signs of wear and previous use. Overall we expect it to be in very good condition, but if you are not entirely satisfied please get in touch with us.