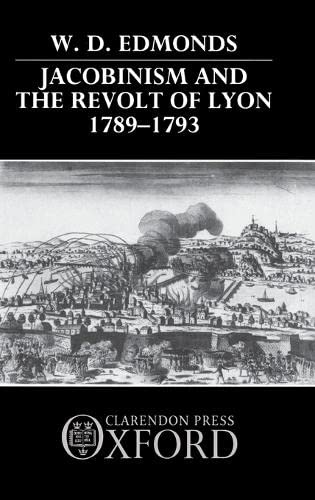 In Stock
£30.99
Although much has been written about Lyon during the Great Terror of 1793-1794, this is the first detailed study of the four turbulent years which left France's second city marked out for savage repression by the Jacobin Republic.
Very Good
Only 1 left

Although much has been written about Lyon during the Great Terror of 1793-1794, this is the first detailed, integrated study of the four turbulent years which left France's second city marked out for savage repression by the Jacobin Republic. Taking account of recent research, the author emphasizes the interaction of social tensions with political rivalries in the succession of crises which set Lyon on a collision course with the national government. Deep social divisions had a close bearing on the two most notable features of the city's revolutionary history: the precocious emergence of a popular democratic movement, and the violent radicalism of the Lyonnais Jacobins. Through close study of these factors, the book contributes to the history of Jacobinism and political participation during the first European democratic revolution. It also throws light on Lyon's part in the `federalist' revolt against Jacobinism in 1793 and on the causes of the Great Terror. A postscript surveys the impact of the Terror on the defeated city.

`perhaps the most thorough account yet penned of a provincial city's reponse to the Revolutionary upheaval. Edmonds not only provides us with a political history of Lyon from the vantage-point of the periphery (as opposed to the more usual Parisian, neo-Jacobin perspective), he provides what amounts to a parallel social history of the city as well. French History
`It presents a quite excellent political and social analysis of the city'. Michael Duffy, History, Oct 1991, vol 76.
'The principal interest of this study is its original blend of social analysis and political history. It is as if the Fench revolution at least succeeded in uniting people against it if it could not unite them in its cause. I find that idea striking and intriguing, and Edmonds's demonstration is solidly documented and well argued.' Francois Furet, University of Chicago, Journal of Modern History, Volume 64, Number 1, March 1992
'thorough and sensitive book ... A short review can scarcely do justice to this complex and multifaceted work ... this is a fine work in which all serious students of the French Revolution will find much to learn.' Paul R. Hanson, Butler University, American Historical Review, February 1992
`... splendid monograph, ... He skilfully explores the social geography of the city, in order to analyse the patterns of neighbourhood solidarity that were expressed in the section assemblies and underpinned political conflict.' Malcolm Crook, British Journal of Eighteenth Century Studies

List of maps; Introduction; Lyon in the 1780s; Disorder and repression: Dilemmas of the Patriotes 1789-1790; Clubiste ascendancy and federallantist response; The great upheaval; A precarious victory: The Jacobins in power; From anti-Jacobinism to "Federalism"; From Federalism to civil war; The siege; Conclusion; Postscript: The terror; Appendices; Bibliography; Index