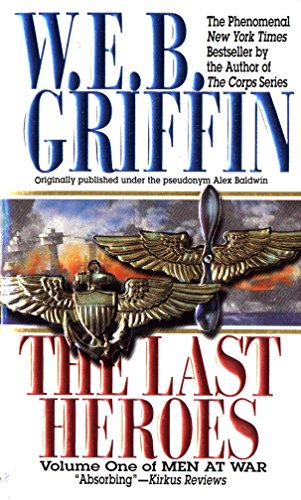 The Last Heroes
by W. E. B. Griffin

The Last Heroes by W. E. B. Griffin

In "The Last Heroes," it is June 1941. War clouds break over Europe, and determined that the United States will be prepared, Franklin D. Roosevelt and "Wild Bill" Donovan orchestrate the most complex espionage organization in history, the Office of Strategic Services. Young and daring, the handpicked members of the OSS assemble under a thin camouflage of diplomacy and then disperse throughout the world to conduct operations upon which may hinge the entire outcome of the war. And of them all, no operation may be more critical than the one being conducted by hotshot pilot Richard Canidy and his half-German wild-card friend Eric Fulmar: to secure the rare ore that will power a top-secret weapon coveted on both sides of the Atlantic - the atomic bomb.

W. E. B. Griffin is the author of seven bestselling series: The Corps, Brotherhood of War, Badge of Honor, Men at War, Honor Bound, Presidential Agent, and now Clandestine Operations. He lives in Fairhope, Alabama, and Buenos Aires, Argentina.