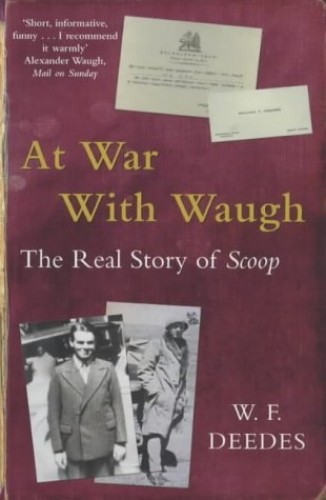 At War With Waugh
by W. F. Deedes

In Stock
£5.49
A delightful book of memoir from one of Britain's most beloved journalists
Very Good Good
Only 3 left

At War With Waugh Summary

At War With Waugh: The Real Story of Scoop by W. F. Deedes

History, both political and literary, was made when W. F. Deedes met Evelyn Waugh in 1935. Both were in Abyssinia to cover a war which many in England regarded with bewildered indifference but which profoundly influenced an impending global conflict. Whilst Deedes was principally concerned with filing copy to London, the author of Brideshead Revisited had another agenda and another novel in mind, Scoop.

As Waugh drank, played poker and observed hacks in seedy hotel bars in Addis Ababa, he focussed on one young reporter. W. F. Deedes has always denied his association with Scoop's Boot, the innocent abroad and nature-notes writer who is accidentally dispatched to a war-zone. However, he acknowledges some similarities - particularly the tonnage of kit he shipped from London.

Bill Deedes considers that 'little' war and its importance with the hindsight of a further sixty-odd years of impeccably thoughtful reporting from other battlefields, whilst offering unique memories of his difficult contemporary - arguably the finest English novelist of his time. Written with characteristic wit, insight and affection, At War With Waugh is a small classic.

W. F. Deedes is the only person ever to have been both a Cabinet Minister and a national newspaper editor. He was a minister in Harold Macmillan's administration and later became Editor of the Daily Telegraph. He appears on television and radio frequently and has recently run high profile anti-landmine campaigns. He is ninety years old and is the author of Dear Bill, his Fleet Street memoirs published by Pan.

GOR001414977
At War With Waugh: The Real Story of Scoop by W. F. Deedes
W. F. Deedes
Used - Very Good
Paperback
Pan Macmillan
2004-04-02
144
033041268X
9780330412681
Short-listed for Saga Award for Wit 2003
Book picture is for illustrative purposes only, actual binding, cover or edition may vary.
This is a used book - there is no escaping the fact it has been read by someone else and it will show signs of wear and previous use. Overall we expect it to be in very good condition, but if you are not entirely satisfied please get in touch with us.