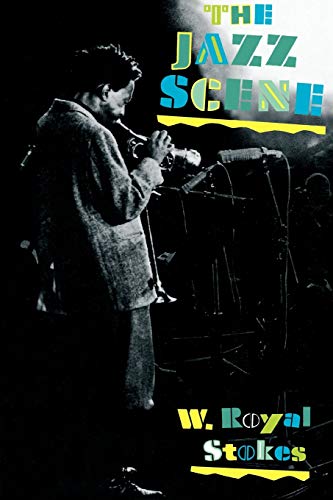 In Stock
£8.99
In this vivid oral history, Stokes presents nearly a century of jazz--its people, places, periods, and styles--as seen by the artists who created America's most distinctive music. The words of musicians famous and little-known tell us about their origins and adventures, about the places and performers they have known. 26 rare photographs, most of which have never been published.
Very Good Good
Only 2 left

W. Royal Stokes is renowned for his ability to transform revealing interviews into elegant prose. Combining interview with perceptive commentary, this personal history of the whole history and spectrum of American jazz deals with the differing styles found in New Orleans, Chicago, Harlem, Detroit, and Kansas City, and introduces the reader to all manner of composers, bands, singers, and instrumentalists who made their name playing in American and Europe.

`Stokes has encapsulated the compelling diversity of jazz in a single manageable volume. Thoroughly recommended.' Jazz Express
'a living, breathing document of jazz history artfully knitted into a chronological sequence ... His chapter on the origins of jazz is counterbalanced by a brilliant and insightful snapshot of contemporary New Orleans, and his gently proffered socio-economic arguments are as plausible an explanation as I've seen for the neoclassicism of Marsalis and his contemporaries.' Alyn Shipton, Jazz
'an enthralling book, based on dozens of interviews with jazz musicians from all parts of the United States and from all manner of backgrounds ... The book is thorough and absorbing from the first page to the last.' Peter Hepple, Stage & Television Today
'The beauty of Martin Williams's interviews was that they always read like spontaneous encounters between like-minded individuals, rather than Q & A sessions.' Brian Morton, The Times

W. Royal Stokes, Ph.D., has been closely observing the jazz scene since the 1940s and has been writing and lecturing about the art form for two decades. He has served as the Washington Post's jazz critic and as editor and monthly columnist of JazzTimes, and his byline has additionally appeared in down beat, Ms., Travel Holiday, the Washington Times, and many other publications. His radio show "I thought I heard Buddy Bolden say..." has been heard on local air waves since the early '70s. A native of Washington, D.C., he resides in Silver Spring, Maryland, with his wife Erika and sons Sutton and Neale.

GOR001165543
The Jazz Scene: An Informal History from New Orleans to 1990 by W. Royal Stokes (Jazz critic, Washington Post)
W. Royal Stokes (Jazz critic, Washington Post)
Used - Very Good
Paperback
Oxford University Press Inc
1993-09-23
270
0195082702
9780195082708
N/A
Book picture is for illustrative purposes only, actual binding, cover or edition may vary.
This is a used book - there is no escaping the fact it has been read by someone else and it will show signs of wear and previous use. Overall we expect it to be in very good condition, but if you are not entirely satisfied please get in touch with us.