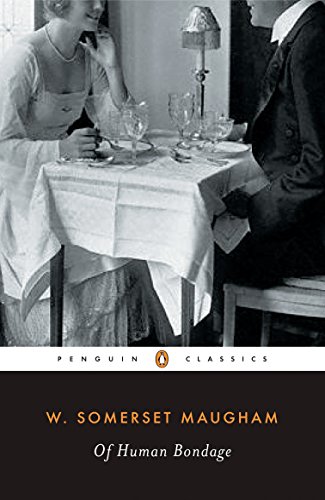 Out of Stock
£3.59
Philip Carey, a handicapped orphan, is brought up by a clergyman, but Philip sheds his religious faith and begins to study art in Paris.
Good
Only 0 left

"It is very difficult for a writer of my generation, if he is honest, to pretend indifference to the work of Somerset Maugham," wrote Gore Vidal. "He was always so entirely there."

Originally published in 1915, Of Human Bondage is a potent expression of the power of sexual obsession and of modern man's yearning for freedom. This classic bildungsroman tells the story of Philip Carey, a sensitive boy born with a clubfoot who is orphaned and raised by a religious aunt and uncle. Philip yearns for adventure, and at eighteen leaves home, eventually pursuing a career as an artist in Paris. When he returns to London to study medicine, he meets the androgynous but alluring Mildred and begins a doomed love affair that will change the course of his life. There is no more powerful story of sexual infatuation, of human longing for connection and freedom.

"Here is a novel of the utmost importance," wrote Theodore Dreiser on publication. "It is a beacon of light by which the wanderer may be guided. . . . One feels as though one were sitting before a splendid Shiraz of priceless texture and intricate weave, admiring, feeling, responding sensually to its colors and tones."

"[Of Human Bondage] was an entirely new departure. Maugham, who usually cultivates a fastidious detachment, shows in this work a personal commitment that was unusual, sweeping the reader up in his own passionate intensity. Compelling and uncompromising, written with an unflagging energy and drive, the work could hardly be more different from any he had previously published . . . The story closely follow[s] the events of Maugham's early life, with at its centre the terrifying experience of a masochistic sexual obsession." --from the Introduction by Selina Hastings

W. Somerset Maugham (1874-1965) lived in Paris until he was ten. He was educated at King's School, Canterbury, and at Heidelberg University. He afterwards walked the wards of St. Thomas's Hospital with a view to practice in medicine, but the success of his first novel, Liza of Lambeth (1897), won him over to letters. Something of his hospital experience is reflected, however, in the first of his masterpieces, Of Human Bondage (1915), and with The Moon and Sixpence (1919) his reputation as a novelist was assured.

His position as one of the most successful playwrights on the London stage was being consolidated simultaneously. His first play, A Man of Honour (1903), was followed by a procession of successes just before and after the First World War. (At one point only Bernard Shaw had more plays running at the same time in London.) His theatre career ended with Sheppey (1933). His fame as a short-story writer began with The Trembling of a Leaf, sub-titled Little Stories of the South Sea Islands, in 1921, after which he published more than ten collections.

W. Somerset Maugham's general books are fewer in number. They include travel books, such as On a Chinese Screen (1922) and Don Fernando (1935), essays, criticism, and the self-revealing The Summing Up (1938) and A Writer's Notebook (1949). He became a Companion of Honour in 1954.

Robert Calder is professor of English at the University of Saskatchewan.

GOR004822646
Of Human Bondage by W. Somerset Maugham
W. Somerset Maugham
Used - Good
Paperback
Unknown
0
0140185224
9780140185225
N/A
Book picture is for illustrative purposes only, actual binding, cover or edition may vary.
This is a used book - there is no escaping the fact it has been read by someone else and it will show signs of wear and previous use. Overall we expect it to be in very good condition, but if you are not entirely satisfied please get in touch with us.