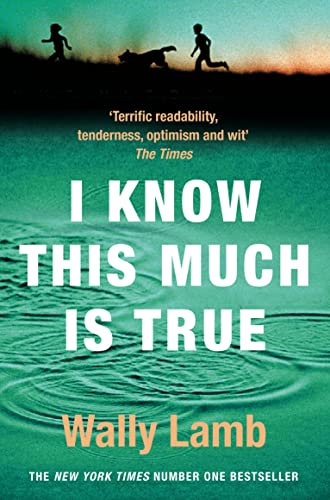 I Know This Much is True
by Wally Lamb

I Know This Much is True Summary

I Know This Much is True by Wally Lamb

Dominick Birdsey's whole existence is coloured by the knowledge that his twin brother can never be fully responsible for his frightening behaviour, while he himself has beaten the biochemical odds to remain sane. But at what cost?

This powerful, heartwrenching drama draws on the deepest human emotions: the need to know oneself, responsibility to family, the influence of hidden history. The result is a highly acclaimed novel of survival, written with great sensitivity.

I Know This Much is True Reviews

'A triumph of simple beauty'
Time

'I Know This Much Is True never grapples with anything less than life's biggest questions... a modern-day Dostoyevsky'
New York Times

'Every now and then a book comes along that sets new standards for writers and readers alike. Wally Lamb's latest novel is stunning - and even that might be an understatement'
Associated Press

'Lamb creates a nuanced picture of a flawed but decent man. And the questions that permeate the novel... contribute to a fully developed and triumphantly resolved exploration of one man's suffering and redemption'
Publishers Weekly

'A modern Greek tragedy... [Lamb's] success is to present this with terrific readability, tenderness, optimism and, most surprisingly, wit... The hallmark of the book is fine writing and a commendable depth of characterisation'
The Times

'Wally Lamb's achievement is to force you to feel Dominick's pain... the events in Dominick's everyday nightmare are presented with a sneaky simplicity which generates emotional tension'
Daily Telegraph

Wally Lamb's first novel, 'She's Come Undone', won rave reviews when it was published in 1992. It was a finalist in the 'Los Angeles Times' First Novel Award, a Top Ten book for 'People' magazine and a Notable Book for the 'New York Times'. Both 'She's Come Undone' and 'I Know This Much Is True' have been chosen for Oprah's Book Club. Wally Lamb now teaches writing at the University of Connecticut. He lives in Connecticut with his wife and their three sons.

GOR001215729
I Know This Much is True by Wally Lamb
Wally Lamb
Used - Very Good
Paperback
HarperCollins Publishers
2000-04-17
912
0006513239
9780006513230
N/A
Book picture is for illustrative purposes only, actual binding, cover or edition may vary.
This is a used book - there is no escaping the fact it has been read by someone else and it will show signs of wear and previous use. Overall we expect it to be in very good condition, but if you are not entirely satisfied please get in touch with us.