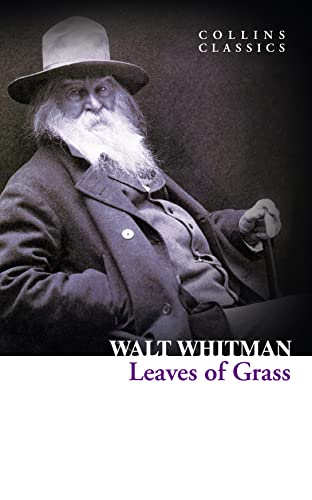 Leaves of Grass
by Walt Whitman

I believe a leaf of grass is no less than the journey work of the stars...

First published in 1855, and edited, revised and expanded over thirty years, 'Leaves of Grass' has become one of the most celebrated poetry collections in the history of American literature. A master of free verse, Walt Whitman captures the true spirit of his homeland and its people through his poetry. He explores a wide range of themes, encompassing American identity and cultural values, democracy, nature and the mysteries of the human spirit.

Featuring the poems of the original 1855 edition, 'Leaves of Grass' remains an influential work within the American literary tradition, studied and treasured around the world.

'I greet you at the beginning of a great career.' Letter from Ralph Waldo Emerson to Walt Whitman, 1855

'The most extraordinary piece of wit and wisdom that America has yet contributed.' Ralph Waldo Emerson

'If you are American, then Walt Whitman is your imaginative father and mother, even if, like myself, you have never composed a line of verse.' Harold Bloom, literary critic

Walt Whitman (1819-92) was an influential American poet and essayist, and is credited with being the founding father of free verse. He first published his culturally significant poetry collection 'Leaves of Grass' in 1855 from his own pocket, and revised and expanded it over thirty years. It is an essential element of America's literary tradition, much taught in schools and universities around the world.

NGR9780008110604
Leaves of Grass (Collins Classics) by Walt Whitman
Walt Whitman
Collins Classics
New
Paperback
HarperCollins Publishers
2015-08-27
176
0008110603
9780008110604
N/A
Book picture is for illustrative purposes only, actual binding, cover or edition may vary.
This is a new book - be the first to read this copy. With untouched pages and a perfect binding, your brand new copy is ready to be opened for the first time.