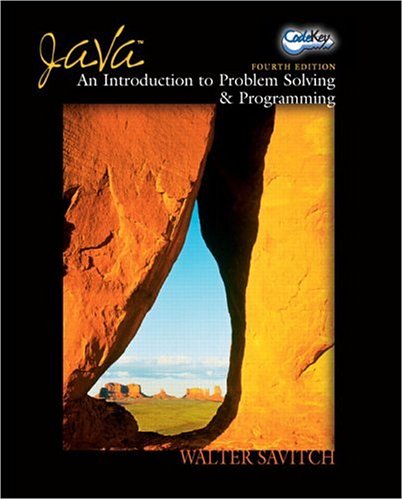 Java: An Introduction to Problem Solving and Programming by Walter J. Savitch

In a conversational style, best-selling author Walter Savitch teaches programmers problem solving and programming techniques with Java. Readers are introduced to object-oriented programming and important computer science concepts such as testing and debugging techniques, program style, inheritance, and exception handling. Savitch includes thorough coverage of the Swing libraries and event-driven programming. The Java coverage is a concise, accessible introduction that covers key language features. Objects are covered thoroughly and early in the text, with an emphasis on applications over applets. The text's highly flexible format enables instructors and readers to adapt coverage to their course needs.

Walter Savitch received the Ph.D. degree in Mathematics from the University of California at Berkeley in 1969. Since that time he has been on the faculty at the University of California at San Diego and is currently a Professor of Computer Science and director of the Interdisciplinary Ph.D. Program in Cognitive Science. Professor Savitch's research areas include complexity theory, formal language theory, computational linguistics, and the development of computer science education materials. In addition to writing numerous research articles and involvement in other editorial projects, he has written a number of well-known computer science textbooks, including Pascal, Ada, and C++ CS1 and CS2 textbooks.

1. Introduction to Computers and Java

5. More About Objects and Methods

Appendix 11: Differences Between C++ and Java

GOR004722072
Java: An Introduction to Problem Solving and Programming by Walter J. Savitch
Walter J. Savitch
Used - Very Good
Paperback
Pearson Education (US)
2004-12-01
1309
0131492020
9780131492028
N/A
Book picture is for illustrative purposes only, actual binding, cover or edition may vary.
This is a used book - there is no escaping the fact it has been read by someone else and it will show signs of wear and previous use. Overall we expect it to be in very good condition, but if you are not entirely satisfied please get in touch with us.