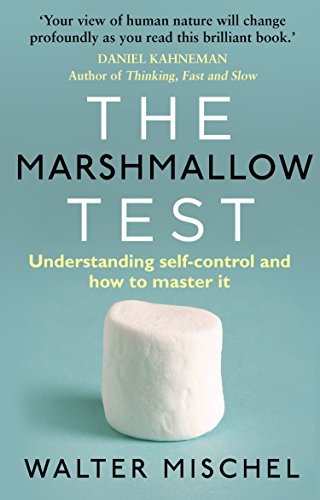 The Marshmallow Test
by Walter Mischel

In Stock
£3.59
A child is presented with a marshmallow and given a choice: Eat this one now, or wait and enjoy two later. And since, as Mischel argues, a life with too much self-control can be as unfulfilling as one with too little, this book will also teach you when it's time to ring the bell and enjoy that marshmallow.
Like New Very Good Good Well Read
Only 3 left

The Marshmallow Test: Understanding Self-control and How To Master It by Walter Mischel

A child is presented with a marshmallow and given a choice: Eat this one now, or wait and enjoy two later. What will she do? And what are the implications for her behaviour later in life? Walter Mischel's now iconic 'marshmallow test,' one of the most famous experiments in the history of psychology, proved that the ability to delay gratification is critical to living a successful and fulfilling life: self-control not only predicts higher marks in school, better social and cognitive functioning, and a greater sense of self-worth; it also helps us manage stress, pursue goals more effectively, and cope with painful emotions. But is willpower prewired, or can it be taught? In his groundbreaking new book, Dr. Mischel draws on decades of compelling research and life examples to explore the nature of willpower, identifying the cognitive skills and mental mechanisms that enable it and showing how these can be applied to challenges in everyday life--from weight control to quitting smoking, overcoming heartbreak, making major decisions, and planning for retirement. With profound implications for the choices we make in parenting, education, public policy and self-care, The Marshmallow Test will change the way we think about who we are and what we can be. And since, as Mischel argues, a life with too much self-control can be as unfulfilling as one with too little, this book will also teach you when it's time to ring the bell and enjoy that marshmallow.

"The Marshmallow Test is a tour de force. Despite its serious academic content, it wears its learning lightly ... this book will make [Mischel] as much of a household name as his marshmallows are." -- Natalie Gold * The Times *
"This is a complex book that explores human nature, neuroscience and genetics, enlivened by a sprinkling of anecdotes. It's also a book that can show you how to change your behaviour: whether it's finally setting up that pension, cutting your alcohol intake or shunning the marshmallows for good." -- Rosamund Urwin * Evening Standard *
"This is a genial, optimistic book and a rather soothing read ... it provides an important and largely painless insight into a profound transformation in psychology" * The Sunday Times *
"Walter Mischel is one of the most influential psychologists of the 20th century, and The Marshmallow Test will make him one of the most influential in this century, too." * Steven Pinker *
"A top five psychology title" * Independent on Sunday *

Walter Mischel holds the Robert Johnston Niven chair as professor of humane letters in psychology at Columbia University. He is the author of more than two hundred scientific papers as well as the coauthor of Introduction to Personality, now in its eighth edition. He has been elected to the National Academy of Sciences and the American Academy of Arts and Sciences, and has won the Distinguished Scientific Contribution Award of APA and the Grawemeyer Award for Psychology. He lives in New York.

GOR007702770
The Marshmallow Test: Understanding Self-control and How To Master It by Walter Mischel
Walter Mischel
Used - Like New
Paperback
Transworld Publishers Ltd
2015-09-10
336
0552168866
9780552168861
N/A
Book picture is for illustrative purposes only, actual binding, cover or edition may vary.
The book has been read, but looks new. The book cover has no visible wear, and the dust jacket is included if applicable. No missing or damaged pages, no tears, possible very minimal creasing, no underlining or highlighting of text, and no writing in the margins.