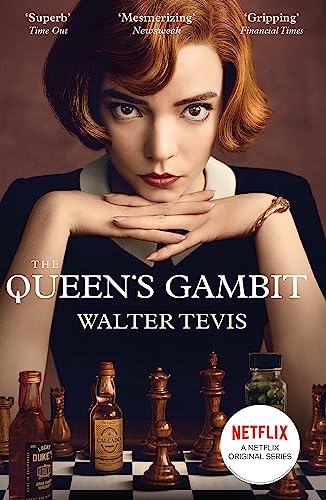 The Queen's Gambit
by Walter Tevis

New Price
£8.99
Free Shipping in the UK
A modern classic about a troubled chess prodigy and her battle to survive --- a coming of age story of feminism, chess and addiction
Reviews:
Trustpilot
New£8.99

'Superb' Time Out
'Mesmerizing' Newsweek
'Gripping' Financial Times
'Sheer entertainment. It is a book I reread every few years - for the pure pleasure and skill of it' Michael Ondaatje
'Don't pick this up if you want a night's sleep' Scotsman

When she is sent to an orphanage at the age of eight, Beth Harmon soon discovers two ways to escape her surroundings, albeit fleetingly: playing chess and taking the little green pills given to her and the other children to keep them subdued. Before long, it becomes apparent that hers is a prodigious talent, and as she progresses to the top of the US chess rankings she is able to forge a new life for herself. But she can never quite overcome her urge to self-destruct. For Beth, there's more at stake than merely winning and losing.

Superb * TIME OUT *
Gripping reading . . . Nabokov's The Defense and Zweig's The Royal Game are the classics. Now joining them is The Queen's Gambit * FINANCIAL TIMES *
The Queen's Gambit is sheer entertainment. It is a book I reread every few years - for the pure pleasure and skill of it
Mesmerizing * NEWSWEEK *
Don't pick this up if you want a night's sleep * SCOTSMAN *
More exciting than any thriller I've seen lately; more than that, beautifully written
What Walter Tevis did for pool in The Hustler, he does for chess in The Queen's Gambit * PLAYBOY *
A psychological thriller * NEW YORK TIMES *
Walter Tevis is famous for writing The Hustler and The Man Who Fell to Earth, but this is my favorite book of his. It is about a girl who, guided by her somewhat unreliable mother, becomes a child prodigy at chess. Even if you do not know how to play chess, it is a great thriller * Literary Hub *
Tevis was a great storyteller
Walter Tevis's most consummate and heartbreaking work

Walter Tevis was an American novelist and short story writer. Whilst a student at the University of Kentucky, Tevis worked in a pool hall and published a story about the game for an English class. He would later revisit his love for pool in the novels THE HUSTLER (1959) and THE COLOR OF MONEY (1984), both of which would be adapted into multiple award-winning films starring Paul Newman. Among his other works, THE MAN WHO FELL TO EARTH (1963) and MOCKINGBIRD (1980) are considered masterpieces of science fiction. Tevis died in 1984.