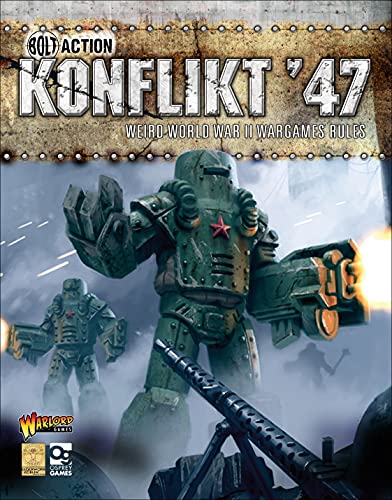 Used Price
£18.99
Free Shipping in the UK
When the Fat Boy atomic bomb was dropped on Dresden on 12 March 1944, it created a second rift, and German scientists quickly set to work studying it. Both the US and Germany were reluctant to share these advances with their allies, and in May 1944, Stalin declared the US to be an enemy of the Motherland.
Very Good

1944 Atomic testing at Los Alamos opens a rift in the fabric of space, while the detonation of the Fat Boy atomic bomb over Dresden creates a second. German and American scientists determine that signals are being transmitted through the rifts, many indecipherable, but some containing revolutionary scientific and technological theorems. Desperate for any military advantage, Germany and the US swiftly apply these discoveries to their war efforts, and incredible new weapons begin to appear on the battlefield. Angered by America's refusal to share the secrets of Rift-tech, Stalin declares war on the US and Britain, and the Allies are fractured. 1947 World War II has entered a completely new phase. Power-armoured infantry armed with personal wonder-weapons follow super-heavy tanks and mechanised walkers into battle, smashing defences with colossal firepower, while genetic monstrosities are sent out to hunt and terrorise enemy forces. This is the new nature of war. This is Konflikt '47. *** With rules inspired by the award-winning Bolt Action system, this standalone game takes World War II to a completely new level, and offers everything required to harness the incredible weapons and technologies made possible by the rift signals, and to engage in tabletop battles for supremacy and survival.

"Overall, [Konflikt '47] looks to be an impressive new take on the Bolt Action game we all love and enjoy. The new units and special rules seem cool and a great opportunity to add a lot of flavour into the normal Bolt Action world." - boltaction.net

"This book is gorgeous!!! The artwork within is fantastic and really gets my imagination going! . . . Well worth a look by anyone interested in Weird War and/or has thought about getting into 28mm World War Two miniatures." - Must Contain Minis

Warlord Games is one of the world's leading producers of wargaming miniatures, as well as the publisher of the successful Black Powder and Hail Caesar rule sets. Their Bolt Action range of 28mm World War II miniatures is the most extensive on the market and continues to grow and develop. Clockwork Goblin Miniatures is a UK-based company devoted to the production of fine quality wargames and miniatures. They also develop rules for games and work as 'designers for hire' on miniatures projects big and small! Jon Cave is a freelance illustrator and concept artist. Having studied Fine Art at university, he then decided he wanted to actually make art for a living, so learned how to draw and paint instead. Prior to going freelance, he spent a decade honing his skills and drinking coffee in various games companies. When not drawing sci-fi super-soldiers, he teaches life drawing in a pub. He works in a fancy shed at the bottom of his garden in rural Nottinghamshire, UK.

GOR007626126
Konflikt '47: Weird World War II Wargames Rules by Warlord Games
Warlord Games
Bolt Action
Used - Very Good
Hardback
Bloomsbury Publishing PLC
2016-07-20
208
1472815688
9781472815682
N/A
Book picture is for illustrative purposes only, actual binding, cover or edition may vary.
This is a used book - there is no escaping the fact it has been read by someone else and it will show signs of wear and previous use. Overall we expect it to be in very good condition, but if you are not entirely satisfied please get in touch with us.