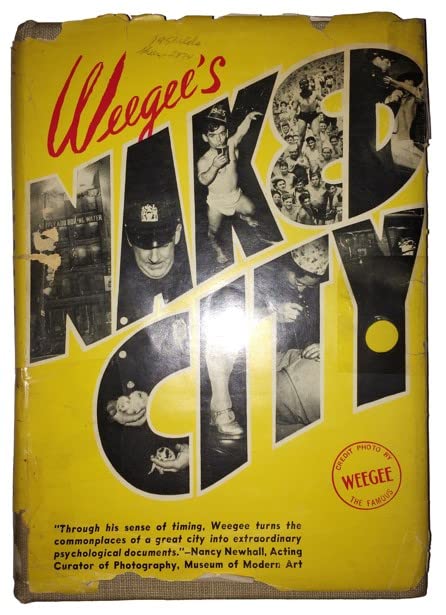 Damiani takes great pleasure in re-publishing this classic photo book from 1945 in a beautifully printed new edition which includes unpublished images and two new esseys by Christopher Bonanos and Christopher George. For his first collection, Naked City, Weegee cruised the streets of 1940s New York in the wee hours in search of the sensational. Lewd, louche, licentious but always brimming with life (except when brimming with death), Weegee's photographs have endured decades of modern art criticism and are again enjoying a much-deserved cult revival. His profound influence on other photographers over the last half-century derives not only from his sensational subject matter and his use of the blinding, close-up flash, but also from his eagerness to photograph the city at all hours, at all levels. Snapping lovers on the beach at 3:00 in the morning, transgender prostitutes in police buggies, bejeweled Society ladies at balls, the desperately poor no one knew New York like Weegee. Naked City showcases his talent, his love of the city, and his taste for the absurd and the unbelievable, and is a book that will forever stand as a classic introduction to the secret life of New York
Weegee was born Usher Fellig on June 12, 1899 in the Austrian Poland town of Lemburg (now part of Ukraine). He first worked as a photographer at age fourteen, three years after his family emigrated to the United States, where his first name was changed to the more American-sounding Arthur. Self-taught, he held many other photography-related jobs before gaining regular employment at a photography studio in lower Manhattan in 1918. This led to work at a variety of newspapers until, in 1935, he became a freelance news photographer. He focused his practice around police headquarters and in 1938 obtained permission to install a police radio in his car. This allowed him to take the first and most sensational photographs of news events and offer them for sale to publications such as the Herald Tribune, Daily News, Post, The Sun, and PM Weekly, among others. Weegee published his photographs in several books, including Naked City (1945), Weegee's People (1946), and Naked Hollywood (1953).

Christopher Bonanos is the author of Flash: The Making of Weegee the Famous, which won the 2018 National Book Critics' Circle award for best biography of the year, and Instant: The Story of Polaroid. He is also the city editor at New York Magazine, where he writes about arts and culture.

Christopher George is the Imaging Associate in the Exhibitions Department of the International Center of Photography, the world's leading institution dedicated to photography and visual culture. George, ICP's Weegee specialist, has scanned some 20,000 Weegee photographs from its archive. He selected photos for the 2016 exhibition Weegee's Bowery at ICP's gallery at Mana Contemporary and was a researcher and co-contributor to the book The Weegee Guide to New York (2014). A prolific content creator, George was written more than six hundred blog posts for Fans in a Flashbulb, ICP's Collections blog.
NPB9788862086950
9788862086950
8862086954
Weegee's Naked City by Weegee
Weegee
New
Hardback
Damiani
20200305
264
N/A
Book picture is for illustrative purposes only, actual binding, cover or edition may vary.
This is a new book - be the first to read this copy. With untouched pages and a perfect binding, your brand new copy is ready to be opened for the first time
Trustpilot