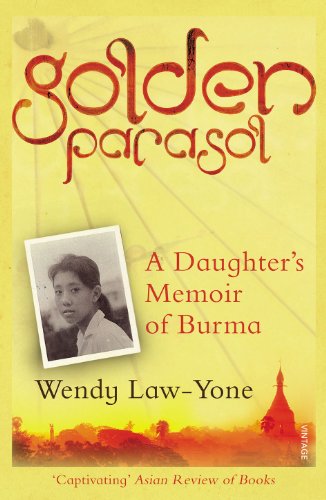 At the time of Burma's military coup in 1962, the author was fifteen. A year later, her father Ed Law-Yone, daredevil proprietor of The Nation newspaper, was arrested and his newspaper shut down. Eventually, she was herself briefly imprisoned before managing to escape the country. This book tells her story.

Golden Parasol: A Daughter's Memoir of Burma by Wendy Law-Yone

A year after Burma's military coup in 1962, Ed Law-Yone, daredevil proprietor of the influential newspaper, The Nation, was arrested and his newspaper shut down.
Eventually, his teenaged daughter Wendy was also imprisoned before managing to escape the country.

Ed spent five years as a political prisoner, but the moment he was freed he set about trying - unsuccessfully - to stage a revolution, and never gave up hope for the restoration of democracy in Burma. Exiled in America, he died disappointed - though not before entrusting to his daughter Wendy his papers and unpublished memoirs: of a career that had spanned the full sweep of modern Burmese history - from colonial rule to independence; from the era of parliamentary democracy to the military coup that would usher in decades of totalitarian rule.

Now, some forty years later, as Burma enters another period of transition, Wendy Law-Yone has honoured her father's legacy by setting his remarkable career in a larger, more personal, story. The result is Golden Parasol, a unique portrait of a patriot, his family, and a nation whose vicissitudescontinue to intrigue the world.

Captivating * Asian Review of Books *
Magnificent... Delivers a riveting experience * South China Morning Post *
Beautifully written with a keen sense of humour, the book is bound to be a classic * Asia Times *
Gorgeous: vivid, precise and awash in remembered sunlight * Independent on Sunday *
Sad, extraordinary and inspiring * Wanderlust *
Wendy Law-Yone was born in Mandalay, Burma, and grew up in Rangoon before fleeing the country at the age of twenty. In America, where she settled for the next three decades, she published two novels, The Coffin Tree and Irrawaddy Tango. A David T.K. Wong creative writing fellowship at the University of East Anglia brought her to the UK in 2002, and she has stayed here ever since. Her third novel, The Road to Wanting, was longlisted for the Orange Prize. She lives in London with her husband.
NGR9780099555995
9780099555995
0099555999
Golden Parasol: A Daughter's Memoir of Burma by Wendy Law-Yone
Wendy Law-Yone
New
Paperback
Vintage Publishing
2014-06-12
320
N/A
Book picture is for illustrative purposes only, actual binding, cover or edition may vary.
This is a new book - be the first to read this copy. With untouched pages and a perfect binding, your brand new copy is ready to be opened for the first time
Trustpilot