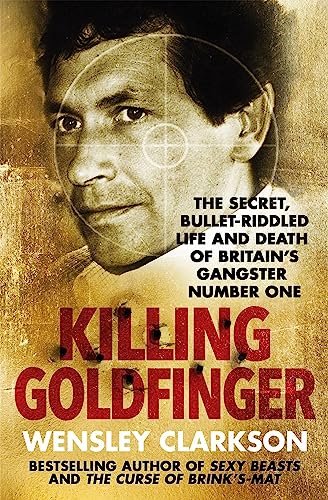 In Stock
£5.99
The inside story of the life and death of Britain's criminal kingpin and the empire he built
Very Good Well Read
13 in stock

Killing Goldfinger: The Secret, Bullet-Riddled Life and Death of Britain's Gangster Number One by Wensley Clarkson

KILLING GOLDFINGER charts the extraordinary rise and spectacular bullet-riddled fall of John Palmer, the richest, most powerful criminal ever to have emerged from the modern British underworld. During the late 1990s, Palmer was rated as rich as The Queen by the Sunday Times Rich List.

Palmer earned his nickname Goldfinger after smelting (in his back garden) tens of millions of pounds worth of stolen gold bullion from the 20th century's most lucrative heist; the Brink's-Mat robbery. Palmer then used his share of the millions to become the vicious overlord of a vast illegal timeshare property empire in Tenerife. At the same time,Goldfinger financed huge international drugs shipments as well as some of the most notorious UK robberies of the past 30 years, including the GBP50m Securitas heist in Kent in 2006 and, many believe, the Hatton Garden heist in 2015.

Palmer vowed to hunt down all his underworld enemies. But in the end it was those same criminals who decided to bring his life to an end. Murdered in June 2015, with charges of fraud, money laundering and worse pending, this book tells his murky story for the first time.

As outrageous and bullet-riddled as the hit Netflix series Narcos, Killing Goldfinger tells the true story of Britain's underworld kingpin, who turned the sunshine holiday island of Tenerife into his very own Crime Incorporated and then paid the ultimate price.

WENSLEY CLARKSON has closely investigated John Palmer and many of his criminal associates for the past 30 years through his books and TV documentaries about the British underworld. He's encountered Palmer and many of his friends and enemies, on both sides of the law, and Clarkson's research has included prison visits, surveillance operations, police raids and even post mortems. Clarkson and his family have received death threats from Palmer's associates and the author was recently approached by police detectives investigating the murder of Palmer. There is no-one else more qualified to tell this story.

GOR009028389
Killing Goldfinger: The Secret, Bullet-Riddled Life and Death of Britain's Gangster Number One by Wensley Clarkson
Wensley Clarkson
Used - Very Good
Paperback
Quercus Publishing
2018-06-14
352
1786484889
9781786484888
N/A
Book picture is for illustrative purposes only, actual binding, cover or edition may vary.
This is a used book - there is no escaping the fact it has been read by someone else and it will show signs of wear and previous use. Overall we expect it to be in very good condition, but if you are not entirely satisfied please get in touch with us.