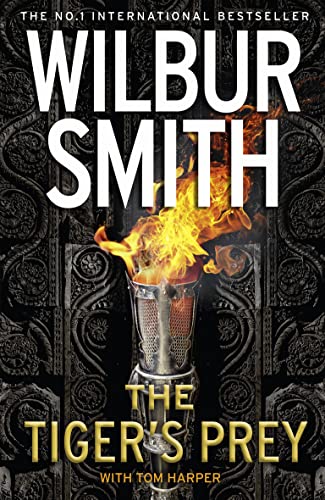 The Tiger's Prey
by Wilbur Smith

The Tiger's Prey by Wilbur Smith

Francis Courtney flees the comfort of his Devonshire estate when his stepfather's gambling debts leave him penniless and at risk. He sails to South Africa with revenge and fortune on his mind: his uncle Tom Courtney killed his father, and Francis intends to avenge his death and make his fortune in the process. However, upon his arrival in Cape Town, he uncovers a truth that leaves him overwhelmed and disoriented.

Christopher Courtney sets out to make his own way in the world, giving up his privileged position as the son of the Governor of Bombay. The perils and betrayals on his journey carve a fierce warrior out of him, but they also harden his soul and lead him to greater violence and treachery. As the lives of these two Courtney men intertwine, the sins of the fathers will forever alter the lives of a younger generation.

The Tiger's Prey takes readers on an epic journey from the southernmost point of Africa, through the perilous waters of the Arabian Sea, to the lush Indian coastline. It is an incredible and breathless tale of intrigue and family betrayal from one of the world's greatest storytellers.

`No one does adventure quite like Smith' Daily Mirror

Wilbur Smith was born in Central Africa in 1933. He became a full-time writer in 1964 after the successful publication of When the Lion Feeds, and has since written over thirty novels, all meticulously researched on his numerous expeditions worldwide. His books are now translated into twenty-six languages.

GOR008646571
The Tiger's Prey by Wilbur Smith
Wilbur Smith
Used - Very Good
Hardback
HarperCollins Publishers
2017-09-07
432
0007535910
9780007535910
N/A
Book picture is for illustrative purposes only, actual binding, cover or edition may vary.
This is a used book - there is no escaping the fact it has been read by someone else and it will show signs of wear and previous use. Overall we expect it to be in very good condition, but if you are not entirely satisfied please get in touch with us.