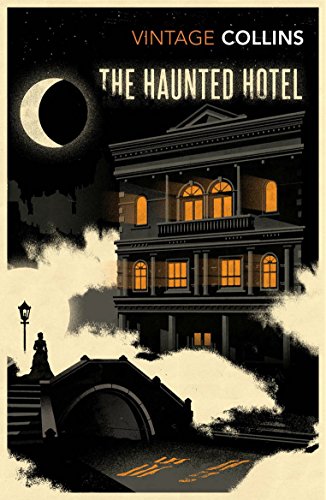 The Haunted Hotel
by Wilkie Collins

New Price
£7.99
Free Shipping in the UK
An enjoyable 19th century read following doomed happenings and grisly, secret premonitions.In the darkened bedroom of a mouldering palazzo by the Grand Canal, an English lord sickens and suddenly dies. Spend the night in Room 14 of Venice's finest hotel, and find out the truth - if you dare...INCLUDES THE GHOST STORY `THE DREAM WOMAN'
Reviews:
Trustpilot
New£7.99

The Haunted Hotel by Wilkie Collins

An enjoyable 19th century read following doomed happenings and grisly, secret premonitions. An eminent doctor is visited by a desperate woman with a question: am I evil, or insane? When the letters from Italian servant to his wife in London suddenly cease, she is convinced he has been murdered. In the darkened bedroom of a mouldering palazzo by the Grand Canal, an English lord sickens and suddenly dies. How are these little mysteries connected? Spend the night in Room 14 of Venice's finest hotel, and find out the truth - if you dare... INCLUDES THE GHOST STORY `THE DREAM WOMAN'

"Alchemy, premonitions, disappearances, madness, supernatural sightings and even a whiff of incest combine...a pleasingly nasty affair" * The Times *
"An atmospheric and ghostly evocation of a wintry Venice in the 1800s" * Guardian *
"Wilkie Collins is the finest practitioner of the novel of sensation... he took the elements gothic fiction relied upon - secret lives, lovers, villainy - and moved them into the suburbs... here the genre fused with the already established crime novel and took it in a new direction, more familiar and more frightening" * Daily Telegraph *
"Wilkie Collins [drew] on the conventions of blood and thunder melodrama but subtly let the reader know he's having fun with the game" * Guardian *

Wilkie Collins was born in London on 8 January 1824. His father was the landscape painter William Collins. After school he worked for a tea merchant before studying to become a lawyer. In 1848 he published a biography of his father and his first novel, Antonina, followed in 1850. In 1851 he met Charles Dickens who would later edit and publish some of his novels. Collins's novels were extremely popular in his own time as well as now. The Woman in White (1859), No Name (1862), Armadale (1866) and The Moonstone (1868) are his best known works. Collins was linked with two women (one of whom bore him three children) but he never married. He died on 23 September 1889.