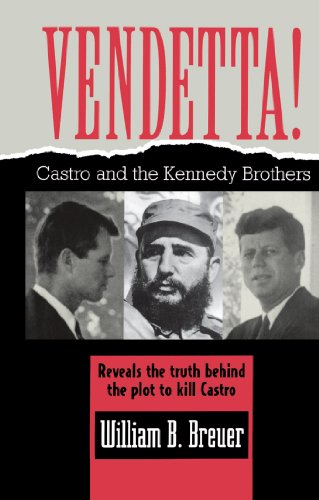 Vendetta
by William B. Breuer

In Stock
£4.49
It was the early 1960s. The Cold War was at its peak. The threat of nuclear war hung over the world. Communist Cuba lurked a mere 90 miles off the coast of Florida, and President John F. Kennedy and his brother, Attorney General Robert Kennedy, undertook a covert campaign to eliminate Fidel Castro and the communist threat.
Good
Only 1 left

Vendetta: Fidel Castro and the Kennedy Brothers by William B. Breuer

1960. As the Cold War reaches its height, so does postwar prosperity, and the American people celebrate their optimism by electing as president the young, charismatic John F. Kennedy. Just 90 miles from the United States, the Cuban people are celebrating the rise of Fidel Castro, their own young and charismatic populist leader who overthrew Batista's oppressive regime. Around the world, a rising tide of Communism is absorbing one country after another. President Kennedy, vowing to keep Communism out of the Western Hemisphere, knows he must confront Castro. It will mean not only testing his own resolve, but maintaining a precarious balancing act. Kennedy cannot allow the United States to be seen as weak, yet he cannot be too aggressive and risk nuclear annihilation. How then to weaken Castro's grip on Cuba--without forcing a showdown between the United States and the Soviet Union? With the aid of his attorney general, his younger brother Robert, the new president, in effect, declares a secret war against Fidel Castro, enlisting the CIA and Cuban refugees. During the next few years, the Kennedys and Castro engage in the most dangerous and covert duel of the Cold War, a fierce vendetta that will take the world to the brink of nuclear confrontation. Now, in this powerful, eye-opening new book, William B. Breuer reveals the startling truth behind the Cuban crisis of the early 1960s. From the Bay of Pigs to Guantanamo Bay and the October '62 missile crisis, Breuer exposes how John and Robert Kennedy worked together to expand the clandestine, sometimes illegal activities to eliminate Castro. Vendetta! is a riveting account of recent history, complete with spies, saboteurs, guerrillas, murder plots, and kidnappings, told in the hard-hitting, dramatic style that has won the author critical acclaim as a chronicler of military intrigue. Based on new firsthand interviews with many of the people who directed and participated in the Kennedys' secret war, Vendetta! includes candid recollections from a host of government officials who are talking about these events for the first time, among them, W. Raymond Wannall, former assistant director of the FBI, and Theodore Shackley, the CIA official who directed the covert actions from Miami. As this fascinating chapter of modern day intrigue unfolds, we are swept into the middle of the action, from tense conferences in the Oval Office to terrifying encounters at Guantanamo Bay, where American-backed forces stood outnumbered and surrounded by Cuban troops. Vendetta! is William B. Breuer at his very best--real-life espionage, political fact and folly, thrilling adventure, and intrigue. Critical Acclaim for William B. Breuer SHADOW WARRIORS "Absorbing ...with colorful yarns ...as suitable for serious students of history as for fans of cloak-and-dagger mayhem, military style." --Publishers Weekly "An engrossing tale of unsung heroes and high-risk missions ...penetrates the little-known espionage, propaganda, and guerrilla operations of the Korean War." --Kirkus Reviews FEUDING ALLIES "A valuable resource ...highly recommended." --Booklist

From Library Journal Breuer (Unexplained Mysteries of World War II, LJ 6/15/97) is a military historian who specializes in books primarily on World War II. With this he has moved his investigations forward in time and geographically into what is foreign territory for him?and it shows. For the most part his newest book skims along the surface of what we already know about Castro and the Kennedy boys. Breuer's research base, for the most part, is thin, with only a smattering of archival sources, some interviews, and a bare minimum of secondary works acknowledged. The writing is choppy and uneven, brightened only now and then by moments of clarity. The best thing about this work is that it is short. For a more informative approach, readers should start with Aleksandr Fursenko and Timothy Naftali's "One Hell of a Gamble": Khrushchev, Castro, and Kennedy, 1958-1964 (LJ 7/97), which is better researched and explores many of the same themes. For larger collections.?Edward Goedeken, Iowa State Univ. Lib., Ames
Copyright 1998 Reed Business Information, Inc. From Kirkus Reviews A specialist in highlighting the drama in espionage and war, Breuer (Shadow Warriors, 1996, etc.) chronicles the escalating clash between President John F. Kennedy and Cuban revolutionary leader Fidel Castro. Breuer's account takes a strong anti-Castro view on the disintegration of relations between the US and Cuba. Yet Breuer is far from pro-Kennedy, demonstrating the similarities between the two leaders, especially their heavy reliance on brothers of parallel temperamentthe humorless and ruthless Bobby Kennedy and Ral Castro. Before Castro had completed his first year in charge of Cuba, President Dwight Eisenhower had ordered the CIA to eliminate him and his revolutionary government. In the early days of his presidential campaign, Kennedy criticized Eisenhower's assessment of the Cuban regime. Only after Kennedy learned of secret plans to invade Cuba did he begin to criticize Castro publicly, due

About William B. Breuer

WILLIAM B. BREUER, one of today's most popular military historians, is the critically acclaimed author of twenty-six books, including Feuding Allies, Shadow Warriors: The Covert War in Korea, and Unexplained Mysteries of World War II (all published by Wiley). Ten of his books were main selections of the Military Book Club, including The Great Raid on Cabanatuan and MacArthur's Undercover War.

Terrorist Plot: Blow Up New York. Machinations in Mexico. A Blueprint for Gaining the White House. A Hoax in the Mountains. Pulling Uncle Sam's Whiskers. "One Bad Apple for Another." "Two Hundred Thousand Yankee Gringos Will Die!" The U.S. Power Barons Disagree. A Safari to the United States. "The United States Should Go It Alone!" "Bobby's As Hard As Nails!" A Secret Scheme Is Born. Intrigue and Covert Actions. Exercises in "Health Alterations." Spooks and a "Tweeping" Plot. "Beardless, Ignorant Kids." An "Evil Nest of Yankee Spies." Showdown on Guantanamo Bay. "The President Said 'No Deal'" "A Catastrophe Is at Hand." The Search for a Scapegoat. An "Assistant President" Emerges. Eleanor Roosevelt: "A Silly Old Lady." Top Secret: Agents CG-5824S and NY-694S. The Dominican Republic Connection. A Green Light for Operation Mongoose. Tension Grips Washington. "Our Blood Ran Cold." "If We Want to Meet in Hell." Shake-up in the Secret War High Command. Shooting Up a Soviet Ship. "We Must Do Something About Castro." "The President's Been Shot!" A Naval Base Under Siege. "We Won't Git!" Recruits for the Guerrilla International. A Tragedy in Los Angeles. Epilogue. Notes and Sources. Index.

GOR010203626
Vendetta: Fidel Castro and the Kennedy Brothers by William B. Breuer
William B. Breuer
Used - Good
Hardback
John Wiley and Sons Ltd
1998-01-26
278
047118456X
9780471184560
N/A
Book picture is for illustrative purposes only, actual binding, cover or edition may vary.
The book has been read but remains in clean condition. All pages are intact and the cover is intact. Some minor wear to the spine.