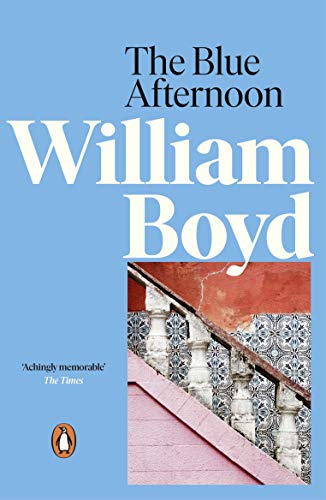 The Blue Afternoon
by William Boyd

Used Price
Free Shipping in the UK
Los Angeles 1936. Kay Fischer, a young, ambitious architect, is shadowed by Salvador Carriscant, an enigmatic stranger claiming to be her father. Within weeks of their first meeting, Kay will join him for an extraordinary journey into the old man's past, initially in search of a murderer, but finally in celebration of a glorious, undying love.
Reviews:
Trustpilot
Very Good

The Blue Afternoon by William Boyd

WINNER OF THE SUNDAY EXPRESS BOOK OF THE YEAR AWARD

A quest for secrets in the blue afternoon . . .

Los Angeles, 1936. Kay Fischer, a young and ambitious architect, is being followed by an old man. When confronted, he explains that his name is Salvador Carriscant - and that he is her father.

In a matter of weeks Kay will join Salvador on an extraordinary journey as they delve back into his past to not only learn the truth behind her own birth, but also to discover the whereabouts of a woman long thought dead - and to uncover the identity of a killer.

'The finest storyteller of his generation' Daily Telegraph

'A brilliant achievement' Time Out

William Boyd was born in 1952 in Accra, Ghana, and grew up there and in Nigeria. He is the author of fifteen highly acclaimed, bestselling novels and five collections of stories. He is married and divides his time between London and south-west France.

GOR002426708
The Blue Afternoon by William Boyd
William Boyd
Used - Very Good
Paperback
Penguin Books Ltd
2010-06-03
336
0141046902
9780141046907
N/A
Book picture is for illustrative purposes only, actual binding, cover or edition may vary.
This is a used book - there is no escaping the fact it has been read by someone else and it will show signs of wear and previous use. Overall we expect it to be in very good condition, but if you are not entirely satisfied please get in touch with us.