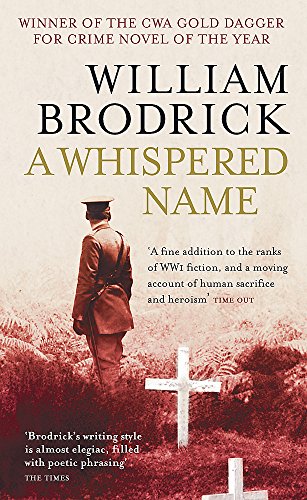 A Whispered Name
by William Brodrick

In Stock
£3.99
A hugely moving and intelligent novel from the bestselling author of The Sixth Lamentation and The Gardens of the Dead, A Whispered Name reaches into the mysteries of one man's past and casts light on the long shadows war leaves behind.
Very Good
9 in stock

A Whispered Name by William Brodrick

To keep quiet about something so important . . . well, it's almost a lie, wouldn't you say?'

When Father Anselm meets Kate Seymour in the cemetery at Larkwood, he is dismayed to hear her allegation. Herbert Moore had been one of the founding fathers of the Priory, revered by all who met him, a man who'd shaped Anselm's own vocation. The idea that someone could look on his grave and speak of a lie is inconceivable. But Anselm soon learns that Herbert did indeed have secrets in his past that he kept hidden all his life. In 1917, during the terrible slaughter of the Passchendaele campaign, a soldier faced a court martial for desertion. Herbert, charged with a responsibility that would change the course of his life, sat upon the panel that judged him. In coming to understand the court martial, Anselm discovers its true significance: a secret victory that transformed the young Captain Moore and shone a light upon the horror of war.

Impressive . . . Brodrick captures brilliantly the sickening nature of the soldier s' task in having to execute one of their own . . . He uses this emotive material to its full potential, spinning out an interior drama that is every bit as gripping as the events themselves . . . Brodrick tells his story skilfully, pacing it well, building up the tension and revealing just enough to keep the pages turning . . . There are some brilliantly evocative and poignant descriptions of the trenches . . . He has succeeded in telling a passionately human story about a most inhuman moment in history * Irish Times *
Sensitively wrought . . . Brodrick's exploratory novels are refreshing and restorative, his style is thoughtful and precise; his integrity powerful. You feel better for having read them. Maybe you are * Spectator *
'The horrors of Passchendaele in 1917 run through this exquisite novel. Just how much can a man take before he must simply walk away? And what kind of strength enables one man to lay down his life for another? * Matthew Lewin, Guardian *
Brodrick writes very well about inner movements of tension and realisation. This is an ambitious book in the way that it balances these profound questions with an intricate and pacy plot, and in its scope, tracing lives spanning nearly a century * Scotsman *

William Brodrick was born in Bolton, Lancashire in 1960. Aged ten the family moved first to Australia and then Canada. He studied philosophy, theology and law, worked with homeless people in London, and then became a barrister, joining a set of chambers in Newcastle-upon-Tyne. He is the author of six Father Anselm novels. The Sixth Lamentation, was a Richard and Judy Book Club Selection, A Whispered Name won the CWA Gold Dagger for 2009 and The Day of the Lie received the Granice Crime Fiction Award at the Krakow Book Fair in 2012 He is married with three children. The family live in Normandy, France.

GOR001206092
A Whispered Name by William Brodrick
William Brodrick
Father Anselm Novels
Used - Very Good
Paperback
Little, Brown Book Group
2009-07-02
352
034912129X
9780349121291
Winner of CWA Gold Dagger for Fiction 2009 (UK)
Book picture is for illustrative purposes only, actual binding, cover or edition may vary.
This is a used book - there is no escaping the fact it has been read by someone else and it will show signs of wear and previous use. Overall we expect it to be in very good condition, but if you are not entirely satisfied please get in touch with us.