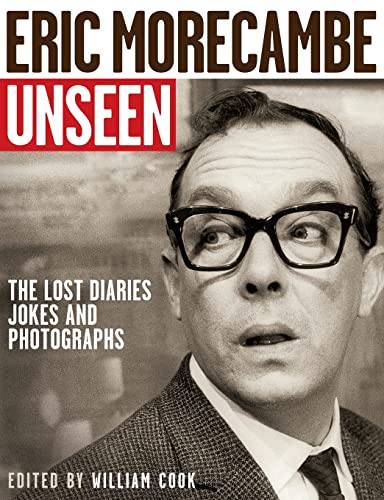 This is a completely original and beautifully designed book on Eric Morecambe, one of the UK's best-loved entertainers. Containing diary entries, unseen photographs and personal letters, this is the most revealing book yet on Morecambe.

This is a completely original and beautifully designed book on Eric Morecambe, one of the UK's best-loved entertainers. Containing diary entries, unseen photographs and personal letters, this is the most revealing book yet on Morecambe.

Posthumously voted 'Comedian of the Century' in 1999 and reaching number 4 in the recent 'Comedian's Comedian Top 50' on Channel 4, Eric Morecambe remains one of Britain's greatest and best-loved comedians.

But even at the height of his success, Eric Morecambe feared his days were numbered as one half of Britain's best-loved comedy duo. It was a dread that had afflicted his whole career, according to his taped diaries, which emerged for the first time at the end of 2004 on the Channel 4 documentary, `The Unseen Eric Morecambe'. The programme was praised both by critics and the general public and it served to renew interest in Morecambe's career and in the man himself.

Containing 15,000 words of unseen diary entries, 200 unseen pictures, jokes and sketches, and letters to both Ernie and Eric himself, everything in this book is 100% personal and original, offering an exclusive insight into a comedic genius who was plagued with self-doubt.

Even through his fear and uncertainty, Eric's inimitable humour shines through his diaries, joke books and personal archives. `The Unseen Eric Morecambe' radiates with the gentle comedy genius that permeates his on-screen appearances, allowing an insight into Eric Morecambe that is both comfortingly familiar and revelatory.

For the many fans of Eric Morecambe this book offers new insights while the stylish, integrated design makes this handsome book an ideal gift purchase.

'This affectionate and revealing book is sure to give a warm glow to anyone who dips into its potpourri of intimate memories. The real pleasure of this book is to be found in the extraordinary portfolio of photographs and memorabilia from his (Morecambe's) personal archive.'
Mail on Sunday

`A real sense of intimacy with a man who captivated millions in the great days of television.'
Sunday Express

`Cook paints a picture of a man of great gentleness and extraordinary talent ... here laid out in photos, letters and diaries. Sunshine indeed.'
The Independent

About Edited by William Cook

William Cook is the author of `Ha Bloody Ha - Comedians Talking' (Fourth Estate), `The Comedy Store - The Club That Changed British Comedy' (Little, Brown) and `25 Years of Viz' (Boxtree). He edited `Tragically I Was An Only Twin - The Complete Peter Cook' and `Goodbye Again - The Definitive Peter Cook and Dudley Moore', both published by Century. He has worked for the BBC and written for the Guardian, the Mail on Sunday, the New Statesman and Conde Nast Traveller.

GOR001171064
Eric Morecambe Unseen: The Lost Diaries, Jokes and Photographs by Edited by William Cook
Edited by William Cook
Used - Very Good
Paperback
HarperCollins Publishers
2006-10-16
256
0007234651
9780007234653
N/A
Book picture is for illustrative purposes only, actual binding, cover or edition may vary.
This is a used book - there is no escaping the fact it has been read by someone else and it will show signs of wear and previous use. Overall we expect it to be in very good condition, but if you are not entirely satisfied please get in touch with us.