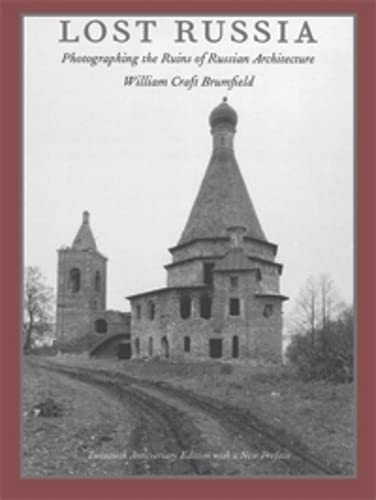 The twentieth century in Russia has been a cataclysm of rare proportions, as war, revolution, famine, and massive political terror tested the limits of human endurance. This title provides a view of author's photographic work, which illuminates Russian culture as reflected in these remnants of its distinctive architectural traditions.

Twentieth Anniversary Edition, with a new preface by the author, available in June 2015

The twentieth century in Russia has been a cataclysm of rare proportions, as war, revolution, famine, and massive political terror tested the limits of human endurance. The results of this assault on Russian culture are particularly evident in ruined architectural monuments, some of which are little known even within Russia itself. Over the past four decades William Craft Brumfield, noted historian and photographer of Russian architecture, has traveled throughout Russia and photographed many of these neglected, lost buildings, poignant and haunting in their ruin. Lost Russia provides a unique view of Brumfield's acclaimed work, which illuminates Russian culture as reflected in these remnants of its distinctive architectural traditions.

Capturing the quiet, ineffable beauty that graces these buildings, these photographs are accompanied by a text that provides not only a brief historical background for Russian architecture, but also Brumfield's personal impressions, thoughts, and insights on the structures he views. Churches and monasteries from the fifteenth to the twentieth century as well as abandoned, ruined manor houses are shown-ravaged by time, willful neglect, and cultural vandalism. Brumfield also illustrates examples of recent local initiatives to preserve cultural landmarks from steady decline and destruction.

Concluding with photographs of the remarkable log architecture found in Russia's far north, Lost Russia is a book for all those concerned with the nation's cultural legacy, history, and architecture, and with historic and cultural preservation generally. It will also interest those who appreciate the fine art of exceptional photography.
The reader is offered a full, rich experience not only through what is seen and illustrated in the exquisite photographs, but also through the astute accounts of the journeys themselves, the impressions and personal reflections. . . . As well as an evocative journey in time, the book is an elegant art book. -- Natalia Berg * East-West Review *
Lost Russia is Brumfield's shortest but most moving book. It could be subtitled 'a meditative elegy in photographs and words.' . . . William Brumfield's photographs can be looked at like going on an inspirational and edifying retreat. The images may or may not remain in your memory, but the subtle effect that they have on your psyche will. -- Archpriest Alexander Garklavs * St Vladimir's Theological Quarterly *

Preface to the 1995 Edition vii

Meditation on the Ruins 125

Index 131
GOR011712229
9780822315681
0822315688
Lost Russia: Photographing the Ruins of Russian Architecture by William Craft Brumfield
William Craft Brumfield
Used - Like New
Paperback
Duke University Press
20150820
144
N/A
Book picture is for illustrative purposes only, actual binding, cover or edition may vary.
The book has been read, but looks new. The book cover has no visible wear, and the dust jacket is included if applicable. No missing or damaged pages, no tears, possible very minimal creasing, no underlining or highlighting of text, and no writing in the margins
Trustpilot